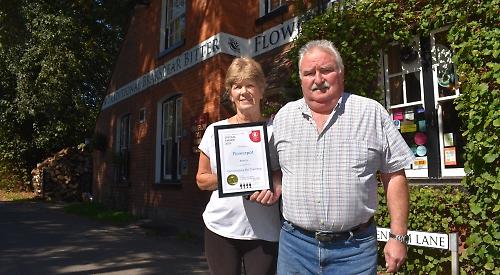 THE Flower Pot in Aston has been named the best pub on an ale trail.

It won the outstanding ale trail pub at the Reading and Mid-Berkshire’s Campaign for Real Ale Awards.

The Brakspear pub, which has been run by Tony Read and his partner Pat Thatcher for 27 years, was one of 24 pubs in the area which was part of this year’s trail.

The couple were presented with a certificate at the awards ceremony at Reading University last week. Mr Read, 69, said: “There was a buffet dinner and they handed out about 30 awards but only one for the ale trail.

“CAMRA said our hospitality was second to none and they had good feedback from customers.

“We are really pleased to get an award from CAMRA — you can’t do better than that.”

The couple, who are Brakspear’s longest-serving tenants, were also honoured by CAMRA last year for outstanding long service.