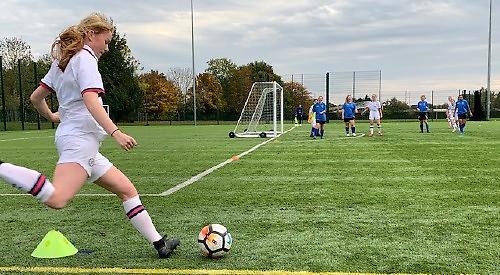 ASPIRING female footballers have praised the Piggott School’s academy for helping them to achieve their ambitions.

The girls’ academy, which started at the secondary school in Wargrave in September, had an intake of 15 students in its the first year.

The school is working with the Chelsea FC Foundation to inspire girls to reach their potential, both as players and in their studies, and is one of 16 academies of its kind across the country.

The programme is academic-led and helps the girls to gain their A-level qualifications while benefiting from professional football coaching.

Among the students is Freya Gordon, of Beggars Hill Road, Charvil, who is studying history, English language and economics and is a semi-professional centre-back. She trains twice a week with the academy and four times with the London Bees, the women’s side for Barnet FC.

She said: “I really enjoy it. It was a new opportunity for all the girls at school and it is a really nice thing to be a part of, especially because of covid as we haven’t had much chance to meet up with other people. This brings us a sense of community.

“It is where you go to play but the studying is very important and I’m quite academically driven anyway, If all looks good, then playing football professionally could be a long-term goal of mine but it is certainly not a case of putting all my eggs in one basket.”

One of Freya’s idols is Reading-born Fran Kirby, who represents Chelsea and England.

Chiana Clark, 16, of Kingsley Close, Charvil, said: “I joined the academy because I think it’s a really good way to develop your skills while studying. The coaches are really engaging and want to know how you’re doing with your studies.”

The academy players are coached by Simon Jackson, who is the Berkshire, Middlesex and Buckinghamshire development officer for the Chelsea FC Foundation and Chelsea’s under-16 women’s coach.

The academy has already received 25 applications for 2021/22.

Andy Freeman, who runs it, said: “We want to see more girls participating in football, so ideally we would like to see that number grow over the coming years. The Piggott School is seeing first-hand how the academy is enriching students’ academic studies, striking a healthy balance of ‘work hard, play hard’ by combining first class education with first class coaching.”