Welcome to the world of the virtual reality viewing 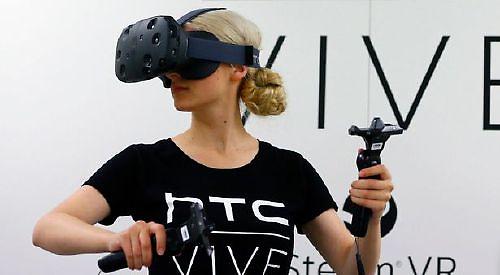 Buying a house off-plan when it doesn’t yet exist is riddled with potential pitfalls... isn’t it? LUCY BOON explores a whole new way of viewing and purchasing property

WHAT if you could look around your new home before it had even been built?

See how the vaulted ceiling and roof lights create light and a feeling of space on the top floor? Understand how the recessed kitchen units result in a gorgeously flush sight-line from front door to rear garden?

Perhaps more importantly, just imagine how many potential mix-ups could be avoided and how many nasty surprises sidestepped.

Thanks to some rather natty software, this is now possible — and it’s being used to help sell two architectural new-builds in Gallowstree Common.

Crucially, this is virtual-reality technology that’s specifically aimed at architects and builders. Don’t confuse it with 3D tours and VR show homes, which estate agencies have been using to help people go remote house-hunting for some time. This is similar but more sophisticated.

The software allows you to take three-dimensional computer models which architects have already created as part of the design process and display them in a virtual-reality headset.

When viewed through two corresponding screens inside the goggles they replicate how our brain perceives depth — resulting in a single, clear 3D image.

As potential property buyers, the bottom line is this: when you put on the headset, you can suddenly “see” and walk around the house you’re interested in buying.

They include a feature known as “dynamic lighting” which simulates the effect of lights and shadows both inside and outside the property at different times of day.

This means you can see, for example, where the sun sets on your garden or which window gets the most sunlight.

Additionally, the architecture is true to scale, so you can gauge how narrow a corridor is, how high a ceiling stretches or how much space a living room offers. And if you’re not happy with how something looks or “works” and want to discuss this with your architect, developer or agent, you can print out images of your VR perspective so that you’ll have a tangible starting point.

David Tate, joint managing director of estate agent Davis Tate, which is marketing the Gallowstree Common properties, says he expects them both to have sold before construction finishes in June.

He said: “Whereas an architect would previously have to rely on
two-dimensional models viewed on a computer screen, they can now translate their working design images into a 3D world.

“This is the first time a local agency is offering something like this to house hunters, and as these houses are structurally special this is particularly significant.

“Selling off-plan with a virtual tour allows the new purchaser to visualise the property inside and out. This is the issue people often have when buying off-plan or new homes as it is very hard to imagine what they will look like.

“Prospective buyers can now visit the roof terrace, check the position of windows in the living room and see if they like the look of the oak finishes and granite countertops in the kitchen.”

The houses will sit on a plot of land off Horsepond Road — the main street through the village, about a five-minute walk from the Reformation pub and a 15-minute drive from Henley or Reading.

They were designed by Coupdeville Architects, a London-based firm which recently opened a second branch in Hart Street, Henley.

Coupedeville director Giles Lovegrove was the chief architect on the project and this week I took up the firm’s challenge to don a fetching pair of HTC Vive goggles and take a tour of one of the houses — hard hat not included.

A handheld control stick and a simple point-and-click interface allowed me to navigate my way around. At the touch of a button I could walk up the driveway, through the front door, into the living room, up the stairs or wherever I wanted.

After a minute or two to get my bearings, I got into the swing of “walking” through the house and garden. By turning my head, much as I would in real life, I was able to grasp a sense of how it would feel to live in this property.

It also gave me a heightened appreciation of Coupedeville’s slick design aesthetic — which it describes as “natural modernism” — and for the carefully-considered building materials.

Grey slate roof tiles and soft, chalk-palette bricks have been chosen for some parts of the build, with contrasting red brick and timber for other parts.

Giles says: “For our projects outside London we tend to use a warmer palette of material with reference to building typologies found in the countryside such as barns.

“The virtual reality technology lets people get a feel for a building and whether or not it’s a good match for them.

“Beforehand, when trying to explain to clients how a building would look, we would watch their eyes glaze over — but now we see their excitement as the penny drops.

“We work closely with property developers and expect VR to attract and help potential buyers — not only to visualise but to experience virtually what they are buying into.

“This is an incredibly exciting time for VR. For the world of property it offers a whole new dimension. But for me as an architect, VR software is a great tool to develop designs, too.

“In architecture, I anticipate in the near future that we will be using this technology not only to view buildings but also to design them, manipulating 3D elements and sculpting spaces effectively within the VR environment.”

Coupdeville has set up a sister company, Create Projects, which specialises in designing kitchens with the software.

Sharon van Geuns, Coupedeville’s kitchen specialist and project manager, said: “We are on the cusp of a virtual-reality revolution in multiple fields. For us, that meant the launch of a design company whose unique selling point is the VR kitchen.

“The software allows us to update our kitchens in real time and given clients an authentic experience of how the space will feel. Materials, cabinetry and costs can be changed instantly while the client is walking around the VR kitchen.”

The houses are being developed by Builtform, which bought the plot last year. Director Neal Harvey, who lives in nearby Checkendon, met the seller through a friend and describes the project as “architecturally exciting.”

Neal has spent 10 years developing buildings in Adelaide, South Australia, and more recently with Builtform on the prestigious Sandbanks peninsula at Poole.

He says: “VR helped us get there faster with the project. It gives you that sense of space that you could never get from CGI images.”

Along with being rather fun, seeing a property via VR has so many advantages to all the parties involved. Think of the time, cost and stress savings. It makes everything much more efficient for buyers, agents and vendors.

But before you become one of the converted, a word of warning: VR won’t necessarily replace existing methods of property viewings.

“There is still value in traditional methods,” says Neal, adding that buyers should still visit the property, even if part-built, walk the plot and touch the materials.

There’s also the risk of “simulator sickness”, which hit me unexpectedly while admiring the garden from the top-floor master suite balcony.

Indeed, with the VR tour over, I then took a trip down to the real-world building site, where I really did don a hard hat.

Seeing the build in the flesh at this point proved a revelation. Where scaffolding and brick boxes existed, I was able to visualise the future staircase and kitchen island.

And, yes, I could even identify the most important spot in the house — the wine fridge. Never say I don’t have my priorities straight.

Neal says: “It’s interesting to see how the VR viewing then assisted with the site viewing. I could see that Lucy had a detailed understanding of the finished house when walking through the building site.”

Could 2017 be the year of VR? Maybe. With so many potential applications, it could become the next major computing platform.

Meanwhile, Peugeot is offering virtual test drives of its new Peugeot 208 and Meta, a rising star in the VR world, is creating simulators to train engineers in underground mining. Could VR estate agencies be next?

David Tate of Davis Tate says: “It’s easy to forget that 15 years ago we didn’t have online marketing with numerous photos and floorplans, ‘recently sold’ prices and Google Maps views at the click of a mouse.

“I’m sure that this is the infancy of a new generation of virtual viewings, and in the new homes arena it will be particularly useful to buyers and sellers alike.”

I’ve said it before and I’ll say it again: just watch this — real world — space.