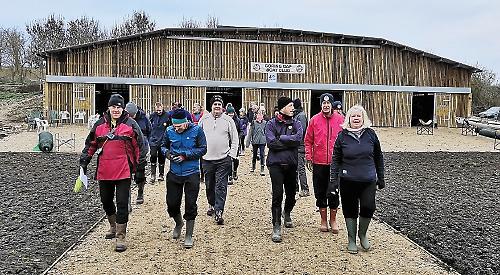 About two dozen members took part in the recreational rowing club’s inaugural session at its new premises next to Gatehampton railway bridge on the opposite side of the River Thames from Goring.

They went upstream to Goring bridge in a flotilla of boats ranging from eights to single sculls before turning around and going downstream to Beale Park, near Pangbourne, and then returning home.

The event marked the end of a
28-year search for a permanent headquarters as the club had been operating from temporary premises since it was founded in 1991.

Chairman Hugh Baker-Smith, who rowed in an eight, said: “It was a very emotional moment and there was no way I wasn’t going to be a part of it. I made absolutely certain that I was in the first boat.

“I had never actually rowed as far as Goring before so it was a new and enjoyable experience for me. I think everyone felt very excited.”

The 8m high timber clubhouse is at the foot of a slope off the A329 on the Yattendon Estate.

It has four bays, three of which are used to accommodate the club’s 50 or so boats while the fourth can be hired.

A mezzanine floor with changing rooms, a training area and other facilities will be built once the club raises £200,000 to pay for it.

The roof will be covered with a grass to preserve views of the North Wessex and Chilterns Areas of Outstanding Natural Beauty.

The club, which revived the biennial Goring and Streatley Regatta in 1992, was originally based at several sites in Goring and later relocated to the Oratory School in Woodcote.

In 2011, the year Mr Baker-Smith became chairman, it moved to a field on the Hardwick Estate at Whitchurch.

Then it was offered the new site on the Yattendon Estate by chief executive Paul Sedgwick, a friend of Mr Baker-Smith.

The former farmland was so overgrown that it took two days to clear a path to the river.

The estate paid for the access road to be dug and the club had to obtain a neighbour’s permission to run a driveway through his land as the original site entrance was deemed to be a hazard by West Berkshire Council.

Planning permission was granted in 2004 after the club had satisfied the concerns of the Environment Agency, which is responsible for the river, the two AONB management boards and Network Rail.

The new building was paid for with £100,000 from club funds, private donations and grants from bodies including Sport England and the Greenham Common Trust. Olympic rowing gold medallist Zac Purchase launched the club’s fund-raising appeal.

The boathouse was erected by Scorpion Buildings, of Hampshire, and much of the landscaping was done by members who pollarded trees and cleared an area for parking. Later this year they will plant grasses and shrubs.

Mr Baker-Smith, who is now leading the latest fund-raising efforts, said: “We’re hoping it will now be easier to get support as we’ve proven that, despite many obstacles, we’ve got what it takes to see it through to the end.

“It’s hard to convince people when all you’ve got is some drawings and a fancy slideshow but this is much more tangible and we’re so happy to see it become a reality after all that time and effort.

“We knew it would be big but in the flesh it is very impressive.

“The whole process, particularly the planning aspect, has been exceptionally complex because of the impact on the two AONBs and we had to build a lot of relationships to convince people that we would approach this sensitively. We had looked at so many sites between Wallingford and Reading and really wanted to end our nomadic existence because you can do so much more when you’ve got your own place.

“It’s quite an achievement as we’ve slowly grown to become the biggest recreational club on the River Thames while working from a shed in a muddy field.

“We’ve introduced about 2,000 people to rowing through our regatta and ‘learn to row’ courses.

“We had to convince Sport England that this would have wide benefits and I think they accepted that we offer a fantastic opportunity for people to enjoy one of the most beautiful stretches of the river.

“If you have neither the means to own and rack your own boat, nor the ability to row for a more serious club, those opportunities can be limited whereas we encourage people of all abilities for a very affordable subscription.

“When we were raising funds, we encountered the perception that rowing is an elitist sport and therefore we shouldn’t need help but we’re very much a community club and want to increase participation.

“It has probably cost at least £350,000 to reach this stage but that’s fantastic value considering the size of the building.

“Because we didn’t leave everything to our contractor, our members can point to some things and say, ‘I did that’. This is a major step forward for us and there’s a real sense of excitement, wonder and ownership.”

• Later this year, the clubhouse and slipway will be used by Floatability, a not-for-profit company which organises sightseeing and fishing trips on the river for people with physical and learning disabilities or mental health conditions.