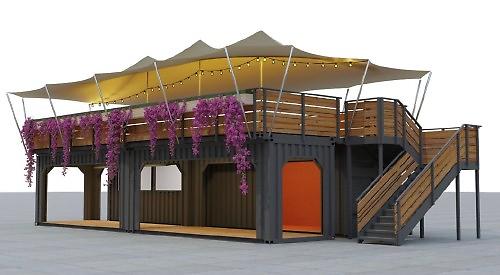 A POP-UP café, bar and restaurant is being set up by the River Thames near Henley.

The Lockdown Lodge, which will open tomorrow (Saturday), is made from four converted shipping containers placed by the Thames Path on the south bank near Hambleden Lock.

They were refurbished at the Woodyard industrial estate in Binfield Heath by gap year student Minna Hughes, of Hambleden, and her father Chris, then driven to the site on Copas land on two lorries.

The containers were put in place on Wednesday using a crane. They have been laid end-to-end in two rows to form one building with a takeaway café downstairs and a terrace with a restaurant on the roof. The former will sell takeaway street food like burgers and hot dogs and will also have a bar while the latter will serve a set fine-dining menu at £49.50 per head.

This will be provided by chef Jimmy Garcia and there will also be a “steak day” on Sundays. Suppliers include Honeys of Henley, Mr Hobbs Gin and Lawlor’s the Bakers and Red Lion Farm at Britwell Salome. The venue will be open from 8am to 11pm daily until August 31, with street food served from midday.

Hobbs of Henley will offer an hourly river taxi service from Red Lion Lawn in Thames Side.

Speaking on Wednesday, Miss Hughes said: “It has gone pretty well so far — there has been a lot of paperwork to get through, which has been the most time-consuming aspect of the business, but it’s all finished now.

“Our alcohol licence was one of the last things to sort out but Wokingham Borough Council was easy to work with. We’ve just taken the keys from Copas and I’m feeling confident.

“We have had so much interest, which was great to hear. We know the upstairs restaurant is going to do well but the café is still a bit nerve-wracking because we can’t predict how popular it will be. I’m crossing my fingers that the weather will be lovely as that will make a huge difference to the footfall on the path.”

Miss Hughes, 19, said the reaction was largely positive when she announced her venture last month but some neighbours expressed concern about noise and increased foot traffic.

She said: “They were very respectful but explained their situation and were asking politely how I planned to deal with any issues that might come up. I’ve contacted them and assured them that we want to be responsible.”

Miss Hughes came up with the idea after her gap year travel plans fell through because of the coronavirus pandemic. She had to race home from Botswana in March before air travel shut down.

She has previously run a mobile catering firm while her father is managing director of Event Kitchens in Binfield Heath, which supplies kitchens for large-scale functions