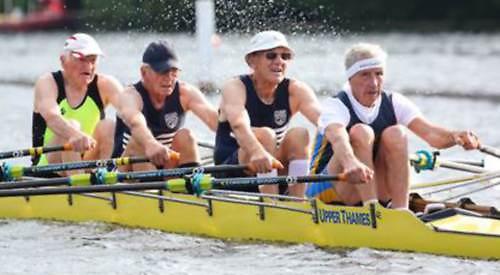 Upper Thames also had success in two composite boats. Upper Thames, with Dart-Tones, Quintin and Wallingford, won the men’s H quadruple sculls by beating Fana Roklubb, Bergen, Norway by three lengths while Mike Lawlor and Peter Taylor were part of the Upper Thames/Nottingham crew that beat a Melbourne/San Diego/Fana Roklub crew by two lengths in the J4x. The winning boat had an average age of 83 years.

Elsewhere in the final of WE2x the Upper Thames crew lost out by just one foot to Lincoln Park from the USA. In that crew Fran Tuite, an overseas Upper Thames member, said after the race: “We borrowed a boat from Upper Thames so feel this is just as much a victory for them as it is for Lincoln Park.”

“I love coming to this regatta from the States, it's completely unique and one of the best international Masters regattas in the world.”

In the final of H8+ the hosts lost by the same one foot margin to a composite crew from Broxbourne that included Olympic gold medallist Klaus Riekermann who won the coxed fours in Rome 1960.

A number of other Upper Thames crews came close, including the C8+ who went down fighting to the fastest crew of the day that comprised ex-GB internationals.

The standard of competition was high throughout the regatta particularly from the overseas crews during the 289 races, with wins for Americans, Australians, Germans and New Zealanders.

Chinook Performance Racing from the US were notable, with six of their crews going home with medals.