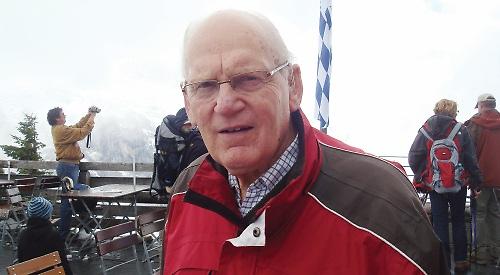 JOHN ALLEN was born on July 21, 1931 in Addlestone, Surrey, the eldest of three children.

He and his sister Jill and brother Michael lived with their parents, Reg and Margaret, above the family’s radio and TV shop on the high street.

Following his time at elementary school, John passed the county scholarship to join Strodes Grammar School in Egham at the age of 11. It was there that his many and varied interests first took root and began to flower.

His first love was music and at Strodes the music master provided him with great inspiration. John joined the school choir as a treble and became an alto and then a bass and continued to sing in choral societies wherever he lived.

In later life he no longer sang but always counted Victorian church anthems among his favourite music.

As a boy, John joined the St John Ambulance Brigade cadets and was one of the first to obtain the Grand Prior badge in Surrey.

He also joined Addlestone Swimming Club and at the age of 14 he passed the exam for the Royal Life Saving Society bronze medal which led to several lifesaving demonstrations over the following years.

This interest in first aid and lifesaving never left him.

John had little ball sense so had no interest in the traditional sports such as football, cricket and rugby.

But Strodes had a highly regarded boat club and it was here that John first took to rowing, eventually becoming captain of boats which in turn led to a lifetime’s involvement with the rowing world.

Another interest that was to become hugely important in John’s life also germinated at Strodes. The art master, in despair at the lack of artistic ability of his class and to keep the pupils quiet, gave them a few lessons on heraldry.

John found these lessons extremely interesting and when a friend showed him a couple of small items that had heraldic designs on them, he eagerly undertook to find out their origin.

Three years after leaving school, he joined the Heraldry Society and another lifelong pursuit was under way.

At the age of 15, John developed yet another interest, the identification of wildflowers.

It was this influence that led him to channel his ultimate career into teaching biology.

The great fulfilment he found in school life made him decide to become a teacher himself in the hope that he might be able to pass on some of these interests to his own pupils.

After leaving Strodes at 18, John joined the army and carried out his National Service from 1949 to 1951.

He was stationed both in the Tower of London and in Berlin and he rowed at number seven in the British Army of the Rhine crew at Henley.

He obtained his certificate of teacher training at Culham College and took up his first teaching post at Horsley’s Green School.

In 1956 he attended a summer school at Wye College in Kent and met Patricia Peach, who was a horticultural graduate of the college.

She was to become the love of John’s life and the mother of his three children.

They were married in 1957 and moved to Henley, where John took up a post teaching rural science and biology at Reading Blue Coat School.

In 1960 John was instrumental in building the Blue Coat School boathouse, consolidating a tradition of the school rowing at regattas on the Thames that continues to this day.

She then took up a post at Reading Blue Coat as a biology teacher, working alongside her husband.

No longer rowing, John now took up rowing journalism as a sideline and to help pay the bills, working as a freelance correspondent for Reuters, the Reading Evening Post, the Henley Standard, the Daily Telegraph and the Times.

He qualified as an umpire and served on the Amateur Rowing Association council.

During this time he was rewarded with membership of Leander Club for his role in setting up the National Youth Rowing Championships.

He was secretary and later president of both Reading Regatta and the Henley Town & Visitors’ Regatta.

Continuing his interest nurtured in the St John Ambulance cadets, he was also safety officer at Henley Royal Regatta for 19 years.

In fact, John attended the regatta in various capacities every year from 1948 to 2017, a total of 70 years.

He continued to study biology, becoming a member of the Royal Institute of Biology.

He also developed his interest in heraldry, eventually founding his own armorial consultancy. He completed his last armorial identification assignment only four days before he died.

John was a Liveryman of the Worshipful Company of Scriveners and was made a Freeman of the City of London.

John and Patricia had collected silver since their wedding but it was in 1977 that he took up silversmithing himself.

He had decided to create an official coat of arms for his own growing family and in 1981 was awarded the Grant of Arms, the motto he chose being “Sparge Gaudium”, or “Spread Joy”.

In 1987 he designed the coat of arms for Henley Town Council and, together with a group of enthusiasts, raised the fees to have it formally granted.

In 1991 John and Patricia both retired. They then travelled extensively, devoted a great deal of time to their garden and continued to pursue their various interests. They were blessed with four grandchildren, Rebecca, Belinda, Emilia and Thomas.

No account of John would be complete without drawing attention to his self-deprecating humour, often delivered deadpan to the accompaniment of gales of laughter.

His life was well-lived — and lived to the full. His many labours continue to bear fruit. For example, Blue Coat School is very near to completing the Grant of Arms that it was John’s long ambition for the school to hold.

But his greatest achievement was perhaps his marriage and his family. During the 60 years they were wed, John and Patricia remained devoted to one another and were constantly beguiled and entertained by each other’s activities, interests and stories.

Patricia particularly loved John’s sense of humour, relishing how he made her and others laugh on a daily basis.

His children and grandchildren will miss him greatly but they and Patricia are comforted in remembering a life full of interest, variety, activity and humour, a life lived modestly but joyfully, a life that has branched out to so many to spread joy.