Food festival will be back with second helping next year 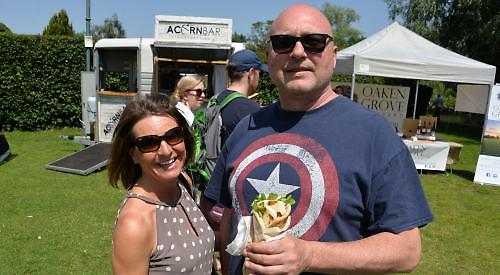 A NEW food festival in Henley has been hailed a success and the organiser says it will be back next year.

The two-week Eat! Food Festival came to a close with a Riverside Fiesta of food, drink and live music on Mill Meadows on Saturday.

It featured about 30 stalls selling cuisine including hot dogs, wraps, curries and pies. The stallholders included the Oaken Grove vineyard and Acorn Bar, from Fawley, and Olives and Lemons, from Henley. There was also beer being sold by Lovibonds Brewery and Prosecco by Jessecco Prosecco, from Henley. Other attractions included a floating gin bar on the Hobbs of Henley boat, Hibernia.

Organiser Philippa Ratcliffe, a food events curator, of New Street, Henley, said she was delighted with the support at Saturday’s closing event as temperatures reached 32C.

“It was a ridiculously hot day so thanks to everyone who came out in the blistering heat,” she said.

“It was the first year so we were absolutely delighted with it. We had a great line-up of food and drink, bringing different things to Henley, and live music so it was the perfect day in the sunshine.”

She said that 16 events took place over 14 days and added: “We were just thrilled with how many people embraced the event. It’s all about championing Henley, supporting local business and producers and shouting from the rooftops how marvellous Henley is.

“This wasn’t just a one-off — we’re already planning for 2020 so keep your eyes peeled.”