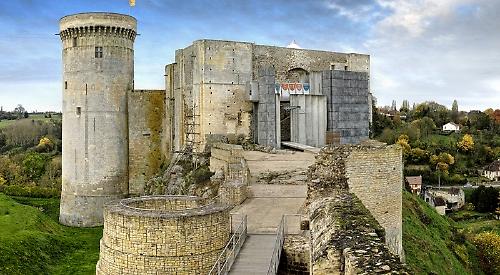 BRITAIN’S departure from the European Union will not damage Henley’s links with its continental counterparts, according to the leaders of the town’s twinning associations.

They say the town’s links with Falaise in France, Leichlingen in Germany and Bled in Slovenia could even be strengthened as residents on both sides of the Channel work harder to keep the relationships strong.

Henley’s oldest connection is with Falaise, which began in 1974. The town in Normandy, about 125 miles west of Paris, has a population of about 9,000. It was the birthplace of William the Conqueror and is famed for its 12th century castle.

The Henley-Falaise Twinning Association has about 40 members here who travel to France every other year with a delegation from Falaise visiting Henley in the years in between. The visitors stay with host families, enjoy displays of quintessentially French or English culture and visit other towns and cities in the different regions.

The association has also arranged exchange visits for Henley organisations including Henley Symphony Orchestra, Henley Operatic and Dramatic Society, AFC Henley and Gillotts School while runners from Falaise have competed in the Henley half marathon and singers from the town took part in a summer concert with members of the Henley Choral Society.

Association chairman Denis McCoy, who has been involved for about 30 years, said: “I hope that Brexit will have a positive impact as the people we know in Falaise are sad that Britain has made this decision. I’m not sure that our association has ever formally debated the issue but my perception is that our members regret the departure so hopefully there will be a slight boost in twinning activity.

“When we make our next visit in May, Falaise will also be welcoming visitors from its own German twin town so that indicates a continued enthusiasm on their side for keeping countries together.

“For our part, we’re taking the Yateley Morris Men so we’re still committed to sharing our culture.

“Our committee will certainly do its best to explore ways of attracting more members and increasing interest. We’re taking five children over with us in May but on the whole it’s very difficult to get younger people involved. The current generation of younger parents have more pressures on their time and, with Henley being an affluent town, I suspect many families go on holidays to Europe under their own initiative.”

Henley’s second oldest twinning link is with Leichlingen in Germany, which began in 1979.

The town lies about 12 miles north of Cologne and is a major centre for apple and berry farming in the Nordrhein-Westfalen region.

The Henley-Leichlingen Twinning Association has about 45 members on this side of the Channel. Secretary Patrick Fleming said many of their German counterparts were upset about Brexit.

He said: “We’ve got lots of friends who’ve expressed dismay that we’re drifting away and are very keen to remain in touch with families over here.

“I was over there a few weeks ago and their mayor gave a speech expressing the hope that, in light of Brexit, we continue to enjoy cultural exchanges and social events through the twinning.

“It’s hard to say whether it will boost interest in twinning nationally but we really want to encourage our young people to play a bigger part in it. In these times they really need an international perspective and the sense that we’re all in this together.

“Our group seems to permanently consist of older people and we’d like to change that. It would be nice if we could bring back things like pen friends, which was a big thing in the Sixties but has dropped off now.

“Unfortunately, life is busier and school budgets are under more pressure so we’d have to be clever in going about it. It might be possible, for example, to encourage friendships through social media and it would be nice to revive the music exchange workshops we used to run.

“We’ll be having talks with people about Leichlingen before we approach the schools in Henley to discuss possible ideas. It wouldn’t have to cost an arm and a leg.”

The link with Bled was forged in 2013 by a group of Henley residents who noted the similarities between the towns.

Bled is slightly smaller than Henley but is famed for its waterside setting as it lies on a lake with a medieval castle in the centre.

It will host the rowing world championships for the fifth time this year and is also a popular open water swimming destination which has attracted competitors from the Henley Open Water Swimming Club.

Henley town councillor Will Hamilton, a member of the Henley Bled Twinning Association, said: “More and more people from Henley are going across and it’s going from strength to strength.

“It seems particularly fertile despite the other twinning associations struggling to get people involved.

“I think our success is down to our fantastic chairman Steve Bennett, who runs things decisively and has organised activities across a range of sporting and educational pursuits.

“We enjoy going there very much and we’re certainly very keen to bring more people from Slovenia to Henley.

“The fact is that Brexit has happened. Some people will be more happy about that than others but that’s the reality of the situation and there’s still no reason that our connections can’t get stronger.

“Twinning shouldn’t be affected because it’s based on the strength of the personal connections which are made between people from two beautiful parts of the world as they get to know each other.”