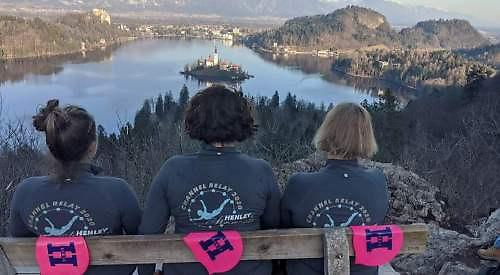 Eighteen people travelled to Bled, which is twinned with Henley, to represent Great Britain in different events.

The championships are held on Lake Bled in February every year and attract elite competitors from all over the world.

The swimmers included Laura Reineke, Joan Fennelly and Fiona Print, who are planning to cross the English Channel in June as a relay team called the Henley Mermaids together with Jo Robb and Susan Barry.

The women hope to raise £8,000 for Henley Music School.

Mrs Reineke, who founded the school, was representing GB for the first time in Bled and came sixth in the 200m breaststroke. She and her fellow mermaids also took part in a relay race with a friend, Phil Warren, and came 13th.

Mrs Reineke, of Berkshire Road, Henley, said: “It was absolutely beautiful. There was crisp blue sky and although the water was cold it was not too cold. It was between 3C and 5C and we have had much worse than that.

“It was still really nerve-wracking. We had to have medicals and blood tests. If you did 200m or more you had to have an ECG and they take your blood pressure.”

There was success for the Henley club in the 1,000m race as Gillian McAllister claimed gold. She also won a silver medal in the 200m freestyle event. Andrew Allum won three medals in the freestyle races — gold at 1,000m, silver at 450m and bronze in the 200m.

Mrs Reineke decided to take part after competing in the Bled Swimming Challenge last summer with about 20 other members of the club.

She took part in the 5km event, while her husband Antony, who runs the Studio 35 jewellers in Duke Street, Henley, did the 1.25km race. Their daughter Ava won the 1.25km junior women’s category.

Mrs Reineke said the latest trip had been a worthwhile addition to the Mermaids’ training schedule, particularly given the unsettled conditions back home caused by heavy rainfall.

She said: “We have had to abort several practices because the conditions are that bad at the moment. We are all going in the cold water as often as we can and we are aware that we only have 14 weeks left.

“The sea will not be that warm when we go because it will be early in the season, so we have got to be prepared.

“We all feel as though we are fit enough. We have all been doing spin classes and Pilates. It will be more of a mental challenge.”

To support the Mermaids, visit www.gofundme.com/f/laura039s-campaign-for-henley-music-school

•Mrs McAllister’s daughter Heather organised a fundraising concert at All Saints’ Church in Peppard, which raised nearly £600. The performers included singer Rebecca Bell, who is also a member of the swimming club.