We were stranded on Greek island for almost four months due to covid-19... and loved it 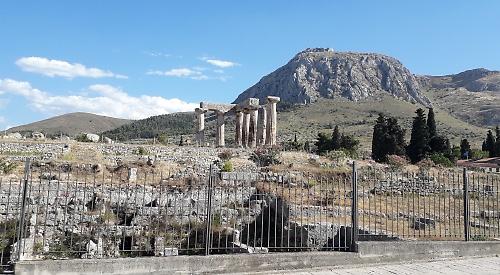 A COUPLE from Kingwood have returned to the UK after spending almost four months on a Greek island due to the coronavirus pandemic.

Freddy and Ann Richardson had planned a two-week holiday on Lefkada but were left stranded when Greece went into lockdown.

All flights and journeys by boat were cancelled and they couldn’t cross back on to the mainland as the bridge was patrolled by police.

But rather than feeling trapped, the couple said it was a “weird and wonderful” experience and they felt safe on the island, which had only one case of covid-19.

During the strictest part of the lockdown, which lasted seven weeks from mid-March to early May, the couple had to text a code to a government number every time they wanted to leave their residence and then had to keep their phones on them.

They could not go more than 1km for exercise and were not allowed to visit the island’s beaches.

The couple, who are retired, left Britain on February 21. They flew to Dubai to see their daughter, Sian, who lives there with her husband, Jaro, and their 18-month-old daughter, Izzy.

They spent 10 days together and then flew to Athens on March 2. After a stopover in Ancient Corinth, the Richardsons made their way westwards to Lefkada, in the Ionian Sea, arriving the following day.

The couple know the area well, having sailed there for 10 years, and had planned to research buying a boat and returning in the summer to sail it.

They checked into an Airbnb in Kataclion for their holiday, not really knowing the scale of the growing coronavirus epidemic as the property didn’t have a television.

Mrs Richardson said: “We had heard about China and we knew that the virus was spreading but we didn’t realise quite the extent of it to be honest.

“There were whispers among the Greeks that the Prime Minister was talking about a potential lockdown but we didn’t have details at that point.

“The first time we knew something very drastic was happening was on March 14 when we set out to go to a taverna for supper and it happened to be shut and we thought, ‘that’s odd’.

“We thought we’d just drive to another one but when we arrived in Nydri nearby it was completely empty.

“We saw someone we knew on the side of the road and we asked ‘what’s happening?’ He said, ‘the virus, everything is now closed’.”

The couple returned to their B&B where the owner told them that Prime Minister Kyriakos Mitsotakis had announced that the country had gone into lockdown.

“It literally happened overnight,” said Mrs Richardson. “We were kind of like ‘okay, what shall we do?’

“We looked at each other and went on the internet to see what the British Government was doing. They had closed the direct flights but we could possibly be repatriated via another country.

“We weren’t able to leave the island after that.”

The couple were due to return to Ancient Corinth on March 17 and enjoy a meal for Mrs Richardson’s birthday before flying home from Athens the following day but the Government had ordered all B&Bs and hotels to close under the lockdown.

Fortunately, the owner of their property let them stay until the end of their two-week booking and then a friend offered to put them up in their villa in the nearby village of Vliho. Mrs Richardson explained: “Because we have been going to Lefkada for some time we did know a few people there.

“We had met an English lady who was married to a Greek guy and they had a villa next to the village where we were staying which had a little bungalow in the grounds.

“We had an open-plan kitchen and a lounge with a bedroom. The couple that looked after us were so kind and they would have helped us with anything.

“We didn’t know how long we would have to stay because there weren’t any flights then at all.

“Our children don’t live in the UK so we didn’t feel the need to come back to help them and we felt they were safe. They were more concerned about us than the other way around. You could only go out if you texted the Government codes which gave them the reason why you were leaving the house.”

They were only permitted to leave the house to visit a chemist, do food shopping or banking or for exercise.

The couple took their daily exercise and went to a supermarket and some food markets that were open. They also picked up items for their hosts and vice-versa.

Mrs Richardson said: “The supermarkets were checking people in with numbers and you had to wear a mask. There was a security guard on the door and hand wash when you went in and the usual 2m distancing.

“Even though we knew there was no virus on the island we felt very respectful of the Greek people because they were taking it so seriously. I didn’t see anyone who didn’t abide by the rules.”

The couple became known as “the teenagers” by their hosts.

Mrs Richardson explained: “We were sleeping in late because the days were long and we didn’t have an awful lot to do apart from our exercise.

“We did some mountain walking. We drove half a kilometre up to the mountains and there was nobody there. We were learning a lot more about sailing. I’m doing my skipper’s course and we were on YouTube videos until 3am.

“We also did a lot of Skyping with our friends, which was lovely, and we had a lot of support from our friends back home. Two of our friends would check our post. We know them very well and trust them and they were opening our mail and reading what it said to us, which was very weird.

“We got someone to come and sort the grass. We also had to get the water and the heating shut off.”

As the couple’s stay lengthened, it threw up more challenges.

Mrs Richardson said: “We had only packed three weeks’ worth of clothes but we managed to buy a pack of three T-shirts and a shaver for Freddy from the supermarket.

“We discovered that you can’t live in Greece for longer than three months without a temporary residency permit so we had to apply for one.

“We had to go to the police station with our passports and our photographs and the next morning there it was.”

The couple had hired a car at Athens airport when they had arrived, which they had been unable to return or use. As the 70 euro a day charge began to mount, they explained the situation to the hire firm and were given a discount.

The Government began to relax the lockdown rules on May 4 and the couple could then go to the beach and swim in the sea.

They were also able to go out for dinner twice and in the last two weeks of their stay visited a yacht club for drinks with the locals at a safe distance.

Mrs Richardson praised Mr Mitsotakis for his response to the pandemic and the Greek people for their warm welcome.

She said: “We had a fantastic time. Freddy and I are very good together, we’re very good mates and it was no problem at all.

“I took thousands of photographs but, you know what, we didn’t send any back home because we felt so guilty. It was a nice place to be stranded!

“In Greece, there were a total of only 190 deaths and 3,000 cases and that’s in a population of just under 11 million. I think there was one case of coronavirus on Lefkada.”

As the weeks rolled by, the couple felt the need to return home became stronger. They booked several flights but these were then cancelled.

“I think we have vouchers for about four flights now,” said Mrs Richardson. “It was only two days before we came home that flights from Athens, through Frankfurt, were opened.”

The couple finally flew into Heathrow airport on June 19 on a Lufthansa flight.

Mrs Richardson said: “There was hardly anybody on the flight. It was less than a quarter full and we had rows of seats to ourselves.”

Their daughter and granddaughter had flown in two weeks previously to escape the summer heat of Dubai and had been self-isolating ready for the couple’s arrival.

Mrs Richardson said the experience had left a lasting impression on them.

“It made us realise that, actually, you can live very simply and we have talked about that since we came back,” she said.

“We now feel that we probably veer more towards the Greek life than we do towards this one. We have learnt a lot from the Greeks, the way they treat their families and the simplicity of life there.

“It was a wonderful experience. It really made a mark on us — in a good way.”