Newbold wraps up title with second half brace 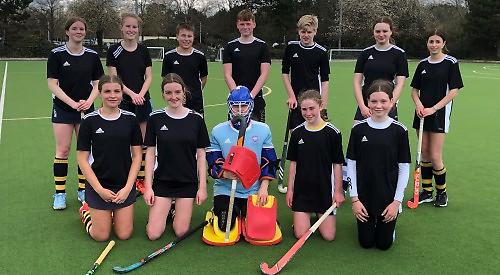 The league was set up to offer some of the older academy players some competitive hockey after the enforced break due to covid restrictions.

Academy players aged between 11 and 17 took part in a round robin tournament culminating in a grand final on Sunday.

The teams, captained ably by four senior academy players who also play adult hockey, battled it out through hail storms and sunshine.

Team C (in orange shirts), captained by Toby Phillips, dominated the group stage with three wins out of three, scoring plenty of goals along the way with four apiece for brothers James and Charlie Edgell.

Team D (in black shirts), captained by Ellie Farrow, were disappointed to lose a tight opening game against Team C team but came back strongly in the remaining group games to reach the final.

Sunday’s final game (Team C versus Team D) saw the orange and black teams battle it out in the sunshine. Both goalkeepers had to make a string of saves and it took until the end of the first half for the deadlock to be broken when Toby Phillips ran through to chip past the keeper to open up a 1-0 lead for Team C. The lead lasted into the second half when Team D’s Georgia Moore equalised and this was swiftly followed by team mate Gracie Newbold’s first of the tournament. Newbold added her second with five minutes to go to put the tie beyond doubt.

Over the course of the tournament there have been eight matches involving 64 players with 35 goals being scored from 20 different players. Top goal scorers for the tournament were James Edgell, Charlie Edgell and Charlie Shaw (four each). Six goalkeepers played across the four teams including 10-year-old Alex Woolfrey who stepped in for the final game and was part of Ellie Farrow’s victorious Team D.