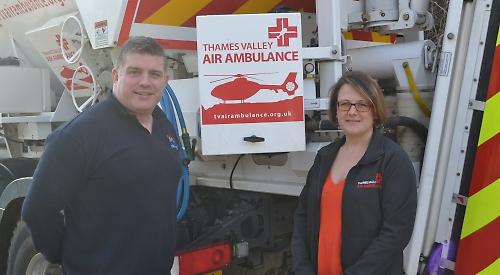 A CONCRETE company has set up a charity partnership with the Thames Valley Air Ambulance.

Manor Mix Concrete, which is based at Manor Farm in Peppard, hopes to raise about £5,000 for the charity this year.

It will donate a percentage of the money made from every pound of concrete poured from a mixer marked with the name of the charity, its logo and website address. Jim Hadfield, sales manager for the company, said: “The branding will stay on there for the duration of the partnership, which will hopefully be a long time.

“We wanted to give something back and it was a good match.”

The partnership was the idea of Matt Payne, who owns the business, who wanted to work with a local charity. The air ambulance is based at RAF Benson and covers
Oxfordshire, Berkshire and Buckinghamshire, averaging three missions a day.

Each flight costs about £2,500 but the charity has to rely on corporate fund-raising and public donations.

Bekki James, corporate fund-raising manager for the charity, said: “Matt decided he wanted a charity that fitted with what Manor Mix does. We would not be able to run without the support of businesses like this.

“We want to work with businesses because it’s great for raising awareness in the community and this partnership helps us to do that.

“It’s important for people to see what the money is going towards.”

To make a donation to the charity, visit www.tvairambulance.org.uk