Walk to the pub takes on new meaning with trails launch 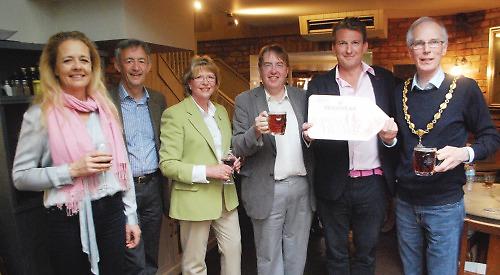 DRINKERS are being encouraged to go walking with the launch of a series of pub trails.

Henley pub company Brakspear has teamed up with the Trust for Oxfordshire’s Environment to offer routes of up to 6.8 miles, ending at one of its pubs.

These include three different walks per pub, starting and finishing in Henley and going via Rotherfield Greys, Bix and Assendon.

The routes were mapped by Toe2 volunteers, including chair of trustees Karen Woolley and her husband Liam.

Tom Davies, chief executive of Brakspear, said: “This started nine months ago when Karen rang me with the fantastic idea of combining walking with pubs.

“She and Liam have been working very hard alongside our marketing manager Emma Sweet. We now have 10 pubs and 30 walks and are looking to expand that. We are here to help make Henley a fantastic place to live and visit and things like this will help to drive that forward.”

Mrs Woolley said: “One of the areas we support is access to green spaces and we put a lot of money into footpath improvements.

“We can only make these improvements if we get funding and Brakspear has made a donation for each walk that goes towards this.

“We are blessed in this area with the wonderful countryside, a fabulous footpath network and good pubs.”

The new trails were launched at a special event at the Station House in Market Place, Henley, attended by Henley MP John Howell, Mayor Julian Brookes and town councillors.

Ms Sweet said: “It’s about getting people out into the countryside and, importantly for Brakspear, getting them into pubs. It’s a community initiative and hopefully shows that we care.

“All these pubs are dog and family friendly. We will get more pubs involved in the summer and others in the winter.”

Henley Town Council has given £300 towards the printing of leaflets which can be displayed at the town hall and in Mill Meadows.

Councillor Sam Evans, who chairs the council’s recreation and amenities committee, said: “This is a fantastic example of the council and a local business working together.

“Brakspear has invested a lot of time and money in this and everyone is going to benefit, residents and visitors alike.”

Councillor David Nimmo Smith, who is a Toe2 trustee, added: “There is some wonderful countryside out here and we want to get people out in it.”

The Henley pubs involved are: the Anchor in Friday Street; the Angel on the Bridge in Thames Side; the Bull on Bell Street; the Little Angel in Remenham Lane; the Old Bell in Bell Street; the Row Barge in West Street; the Saracen’s Head in Greys Road; the Station House; the Three Horseshoes in Reading Road; and the Three Tuns in Market Place.

Also involved are the Catherine Wheel and John Barleycorn in Goring, the Flower Pot in Aston, the King William in Ipsden, the Maltster’s Arms in Rotherfield Greys, the Perch and Pike in South Stoke, the Rainbow Inn in Middle Assendon, the Red Lion in Peppard and the Rising Sun in Witheridge Hill.

Each pub has three routes of between three and seven miles.