Dancing in the playground for Red Nose Day 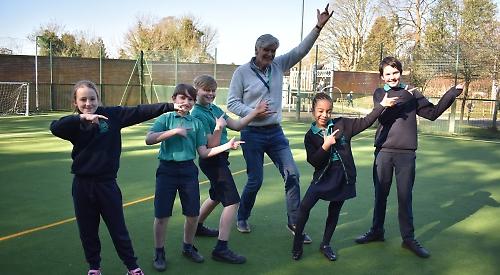 PUPILS at Nettlebed Community School are preparing to take part in a world record attempt dancing challenge for Comic Relief.

The school is one of many across the country which will taking part in Red Nose Day on Friday, March 15 by dancing to David Bowie and Mick Jagger’s Dancing In The Street.

The idea is to get as many people as possible to join the challenge at 9am on the day, each paying £1 to Comic Relief.

Organisers hope to raise millions for charity as well as setting a new Guinness world record.

On Tuesday, actor Simon Williams visited the school, where his eight-year-old granddaughter Rosie Chambers is a pupil, to give the children some encouragement.

He played the song on speakers and led pupils and teachers in a dance on the playground.

Williams said: “We are trying to get all the schools in South Oxfordshire to take part in Dancing in the Street on Red Nose Day.

“Everyone will have to dance for four minutes to break a world record and they will all donate £1.

“It’s about having fun, dancing and helping all the underprivileged people who need help, both here in England and abroad. The children all looked like they enjoyed it and somewhere in there was my granddaughter.”

Headteacher Bethany Greenwood said: “We are delighted to be taking part and supporting a charity which matches all our values at Nettlebed.

“This is the second charity activity we will be doing this month after a fund-raising day for Help for Heroes on March 7.”

• Reading FC are offering fans the chance to buy a limited edition red kit for Comic Relief. All sizes will be available for just £5.