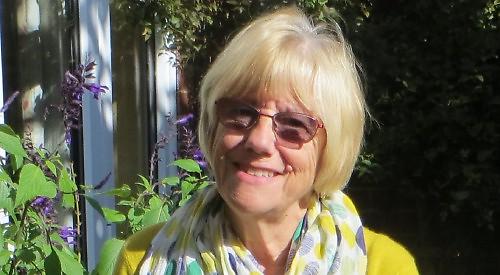 THE secretary of the Goring Gap in Bloom committee is to be awarded the freedom of the village.

The 73-year-old, who lives in Nun’s Acre with her husband Mike, is also secretary and journal editor of the Goring Gap Local History Society and has organised a series of successful exhibitions over the past decade or so.

These included a display at the village hall in 2014 to mark the centenary of the outbreak of the First World War, for which she researched the lives of every villager who died in the conflict, and another in 2018 commemorating the Armistice.

Mrs Hurst is now helping to write Goring’s conservation area appraisal, which will add legal weight to the fight against inappropriate development, and volunteers in various capacities for the Goring Gap News magazine and the village information office.

She was nominated for the accolade, which celebrates those who make exceptional contributions to village life, by a group of 10 residents. A formal presentation will be made by the parish council once the coronavirus crisis ends. Mrs Hurst said: “I was absolutely gobsmacked when they approached me because I don’t deserve any more recognition than anyone else in the village who gives their time to good causes.

“I’ve always volunteered for various things. It’s just what I do and I was amazed that the community wanted to thank me in this way but I’m grateful because it’s a real honour.”

She grew up in Derbyshire and read biochemistry and microbiology at the University of Nottingham. She met her husband on the course and they married shortly after graduating.

They moved around the country for work before settling in Reading in 1986. They have two children, David and Kathryn, and one grandson Max, who is Kathryn’s son.

The couple moved to Goring in 2004 as they wanted to be in the countryside and near the River Thames as they approached retirement.

Mrs Hurst, who worked in the food industry and later served as deputy chief executive of the Microbiology Society, gave up working in 2010.

She has been a keen gardener since childhood and now co-ordinates more than 50 Bloom volunteers who put up and water the village’s floral planters and baskets each year.

She has overseen projects such as the planting of a wildflower meadow near the BT exchange off High Street and in 2017 she planned and supervised the replanting of an exposed earth bank at Goring
station.

Since its inaugural entry, the village has won five gold awards and two silver gilts in the Thames and Chilterns region’s small town category of the Royal Horticultural Society competition.

Goring is taking a break this year and won’t even be able to plant for fun because of the pandemic but has vowed to re-enter next year.

Mrs Hurst follows in the footsteps of the committee’s chairwoman Stephanie Bridle, who won the freedom of Goring three years ago.

The pair were filmed working together for an episode of the BBC 2 documentary series Britain in Bloom that summer.

Mrs Hurst said: “My job used to keep me very busy when I first moved here but I joined the history society early on and was always keen to do more once I had the time.

“I’ve always loved gardening so it’s a privilege to help make the village look beautiful every year and improve the environment for everybody while replacing the ‘grot spots’ with lovely bushes, flowers and shrubs. It’s quite stressful as there’s a lot of planning and work involved and you’re rather dependent on the vagaries of the weather. But it’s also incredibly rewarding, especially when we won the ultimate accolade last year.

“Of course, it’s very much a team effort and I can’t take credit for everything — there are many people who bring our ideas to fruition and we’ve achieved a lot together.

“My task is made a lot easier because so many people are willing to volunteer.

“I’m looking forward to having a year off as it was very tiring preparing for both the regional and national judging. We could all do with less pressure and, as it turns out, we can’t do anything this year but we will be back.”

Her other achievements include a display on life in Goring in the Fifties to celebrate the Queen’s Diamond Jubilee in 2012 and another about the Sixties to mark the society’s 50th anniversary in 2016.

She is researching the history of the buildings in Goring’s conservation area for the appraisal, which will underpin any objections submitted to South Oxfordshire District Council against unwanted planning applications.

Mrs Hurst said: “Goring is such a fantastic community to be a part of because there are so many amazing people and opportunities to get involved. I’m proud to live here.”