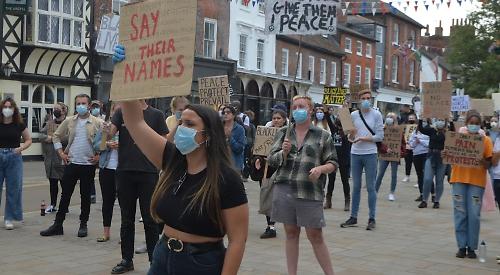 HUNDREDS of people joined a protest in support of Black Lives Matter in Henley this afternoon (Tuesday).

They gathered in Falaise Square from 2pm with the majority wearing face masks.

A silent kneel commenced at 4pm to remember those who have lost their lives because of racism.

Protestors knelt for eight minutes and 46 seconds, the time prosecutors say George Floyd, a black man, was pinned under a white police officer's knee before his death in Minneapolis on May 25.

Organiser Ella Wandless decided to hold the event following waves of protests in cities across America after the death of Mr Floyd.

There were speeches throughout the afternoon and the programme aimed to educate people about systemic racism, white privilege, police brutality and the Black Lives Matter movement.

Ms Wandless spoke about why she arranged the event and there were chants of “black lives matter” as well as “where’s John Howell”.

The Henley MP was not at the rally, but on his website called the killing of Mr Floyd “abhorrent”.

He wrote: “His death has rightly sparked outrage across the world and I am pleased to see that the charge against the police officer in question has been upgraded to second-degree murder.

“I also understand that the three other officers who were present but did nothing to stop the killing of Mr Floyd will now also face charges relating to aiding and abetting second-degree murder and second-degree manslaughter. I support this decision.”

Mr Howell said he did not accept the UK was a racist country.

He added: “On the contrary, the UK is consistently ranked as one of the least racist places to live in Europe.”

The protest was peaceful, but a man was led away from Falaise Square by a police officer shortly before 5pm and spoken to on the corner of Duke Street and Hart Street.