Is this Tom Cruise’s training track? 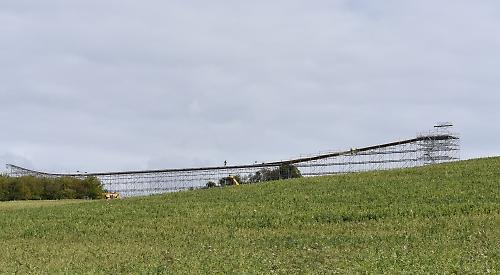 FILM fans may be able to spot Tom Cruise rehearsing for his latest role in South Oxfordshire.

A 135m temporary motorcycle track has been built in this field by the production company behind his 2018 hit film Mission: Impossible — Fallout.

The 58-year-old Hollywood star has already been seen practising his stunts elsewhere in an Oxfordshire field during lockdown.

He reportedly raced around a dirt track on a motocross bike before piloting a helicopter.

Now Jupiter Spring Productions is using this field near an old quarry for rehearsals.

It has created the 3m wide track on scaffolding which slopes upwards from 6m to 10.7m at its highest point.

A planning application submitted to South Oxfordshire District Council by Planit Consulting, of Godalming, said: “There will be no filming taking place at the site and therefore no requirement for the creation of temporary film sets.

“It also means that there will be no busy filming days.

“Instead, the site is to be used to rehearse a particular scene for a film. The use involves placing two cranes, a zip wire and approximately three telehandlers on the quarry site and creating a new section of temporary trackway on the adjacent field to the east.

“At the end of the temporary period, all temporary structures will be removed and the land left in a condition to be agreed with the landowner. Shrubs along the top of the quarry in the north-east corner of the site will be removed to facilitate the installation of a zip wire, which will be connected to two cranes at either end of the site.” The release of the seventh film in the Mission Impossible series has been delayed until November next year after the coronavirus pandemic forced filming to relocate from Venice to the UK and eventually halted production indefinitely.

It is hoped that shooting can begin again next month.

In June, first assistant director Tommy Gormley told BBC Radio 4's Today programme: “We were right at the epicentre when it all kicked off, so we had to shut down in Venice where we were four or five days from shooting.

“We hope to visit all the countries we planned to and look to do a big chunk of it back in the UK on the backlot and in the studio, so September through to the end of April/May is our target. We are convinced we can do this.

“Some things are very challenging, such as stunt scenes, crowd scenes etc., but we can’t do a Mission Impossible movie and not have a fight scene or car scenes in it.”

Co-star Simon Pegg, who plays the character of Benji Dunn, told Variety magazine that the plan was to “begin with the outdoor stuff”.

“That feels fairly doable and obviously there will be precautions put in place,” he said.

“People that are involved in any close proximity stuff… it will have to be determined that they’re safe to do that.

“I don’t know what the testing situation is, how that works, or whether they’ll be able to be tested regularly.”

Vanessa Kirby and Rebecca Ferguson will be reprising their roles in the film, which will be directed by Christopher McQuarrie, who also made the last two installments, Rogue Nation and Fallout.

The quarry was used last year to shoot a scene for 1917, a British war film directed, co-written and produced by Sam Mendes that was released later in the year.

Cruise also stars in a sequel to his 1986 film Top Gun, which has also been delayed until next year due to the pandemic.