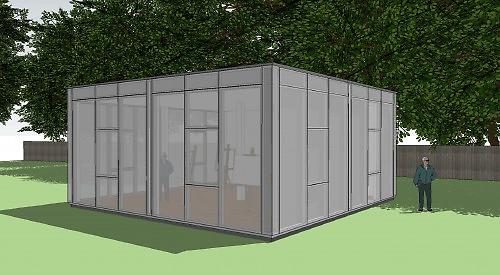 AN artist has been refused planning permission for a studio which he built in the countryside unlawfully.

Clive Hemsley, of Hart Street, Henley, had consent for a small, private facility in Greys Meadow, which is off the main road through Rotherfield Greys.

But he built it much larger than he was allowed with additional outbuildings.

Now it has ruled the building must be demolished.

Neighbours and the parish councillors had opposed the development, saying it was out of keeping with the rural surroundings and had an “urbanising” effect.

The National Trust, which owns the land used to access the site, also objected.

Mr Hemsley has twice previously breached planning regulations — once when he erected a 26ft “living wall” of plants on the side of his Grade II home and again when he attached strings of LED lights to Henley Bridge, which is Grade 1 listed.

His studio plans date back to 2016 when he sought permission to convert an existing stable on the land and said it would be for his use only.

Over the next two years, he made further applications to demolish the stable and replace it with a purpose-built studio with a 77 sq m footprint, including a gross floor area of 100 sq m and a 24 sq m basement. These were approved by the council.

But then Mr Hemsley began building an oak-framed studio with a 102 sq m footprint and 237 sq m of floor space across three storeys, including an entrance porch.

Work on this was almost completed when planning officers ordered him to stop.

He then applied for permission to finish the work, incorporating a lower ground level studio with toilet and a plant room opening on to a sunken patio and tiered garden area, a ground-floor gallery with a toilet and a kitchen and another gallery in the first-floor eaves with a third toilet.

An earth mound consisting of soil from the lower ground floor excavations was to remain at the north-east corner of the field.

The council said the application was “silent” on an unauthorised storage building, outdoor sculptures and bin and garden store.

The first of these is a 40ft shipping container with wooden cladding mounted on purpose-built footings.

The council also said the application “lacked clarity” on the proposed use of the building as the earlier plans said the studio would be private but in seeking pre-application advice for the unlawful building Mr Hemsley referred to “art classes with live-in accommodation”.

Officers told him this wouldn’t be permitted but later discovered signage at the site entrance referred to a gallery and classes.

They said: “In effect, what was a modest single-room art studio... has become a much larger three-storey building containing all the necessary elements for daily living and having the appearance of a substantial detached dwelling.”

Rotherfield Greys Parish Council said the development spoiled views of the Chilterns Area of Outstanding Natural Beauty, clashed with houses on adjoining land and eroded the green buffer with other villages.

Members also claimed that soil had been dumped in woodland nearby.

The National Trust said the buiding had “significantly greater” visual impact than the approved scheme and the earthworks threatened the health of mature trees.

It said: “The proposed use of the site has not been clearly articulated. It would appear that a commercial operation is being proposed.”

Daniel and Emma Thomas labelled the development “anti
social”, adding: “To grant retrospective permission... would set a dangerous precedent that anyone can do what they please — build now, apply later.

“The applicant has a history of disregarding planning rules... it is sad that we let people do exactly as they please, as opposed to obeying the rules that the vast majority of people follow.”

Michael Osborn said: “This was a beautiful grassland paddock before the works started. The building and infrastructure have changed an unlit rural area into a ribbon development.

“I’m sure no planning application would have been granted if the proper applications had been put forward for approval before construction.”

Michael Fisher said: “This unlawful building is a serious threat to the integrity of the planning system.

“We have lived in Shepherds Green for 46 years and cannot believe this has been erected. The land was a field for donkeys and now has a driveway over the verge with a house and store room.”

Planning officers recommended refusal, saying there were no conditions which could make the scheme acceptable.

They said: “The oak-frame construction of the main building is not itself contrary to the rural setting. However, the building as constructed in terms of its size, scale and height do not reflect the same modesty in design as the previously approved scheme or the original stable building it was intended to replace.

“The overall design has all the appearance of a residential dwelling, which is uncharacteristic of this countryside location outside the adjacent settlement.

“The building as constructed is evidently intended for a much more intensive use than previously approved, which... would further contribute to the urbanising impact.

“[It] is situated in an unsustainable location with inadequate access to public transport and insufficient provision has also been made for safe access to the highway network.

“The owner’s disregard for the planning process in undertaking development without obtaining planning permission adds weight to the objections underpinning the recommendation to refuse.”

In 2018, he attached lights to the bridge and a petition to keep them attracted more than 2,500 signatures.

He removed them this summer after a retrospective planning application was turned down.

He put up the “living wall”, which was shaped around a giant portrait of a dog he had painted, in 2017 and it was granted permission a year later. It contains species that absorb air pollution from vehicle exhausts.

• In 2015 the council refused Mr Hemsley’s son Nick permission to use the old stable and surroundings as a house and gardens. A planning inspector upheld the decision on appeal, saying this would be over-intensification of the site.