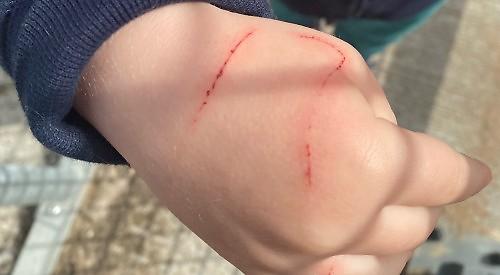 A MOTHER has urged parents to be cautious after a red kite injured her two-year-old son while snatching a biscuit from his hands.

Hannah Bird’s son Frankie was with his grandmother Julie in Valley Road, Henley, when the incident happened.

They were waiting to pick up Frankie’s older brother Cody, eight, from Valley Road Primary School and his grandmother had given him a custard cream.

Without warning, the kite swooped down and scratched the toddler’s hand while grabbing the biscuit.

Frankie, who was sitting in his pushchair, was left terrified as the bird came back moments later before flying away again,

His mother, who was working from home in Highlands Park, took him to Townlands Memorial Hospital, where his right hand was bandaged.

They returned the following day for a check-up and were told the scratches would soon heal.

Mrs Bird, 33, said: “The scratches happened when it came down the first time but it came at them again because it dropped the biscuit and it didn’t know where it had gone. Frankie’s granny tried to protect him and eventually it picked the biscuit up off the ground and flew away.”

Her sister-in-law, Amy, works at the school as a nanny and came out when she found out what had happened.

Mrs Bird said: “She rushed out and they were both frightened. Frankie’s grandmother is not a big fan of birds anyway and has a bit of a fear of them.

“She found the whole thing quite frightening and Amy said she looked grey when she saw her.

“I think she felt guilty that it happened while Frankie was in her care and she certainly won’t be giving him any more biscuits when they are out together.

“Luckily, I was working from home and we were able to get him to Townlands quickly. We waited about an hour for him to see the nurse and she was absolutely amazing.”

Frankie received a teddy bear and a rhino sticker from the hospital for his bravery and enjoyed pancakes after he got home that evening. Mrs Bird said the staff put her son at ease after his ordeal.

She said: “He was quite frightened but the nurse kept him calm. She was very gentle with him and gave him a teddy bear to play with.

“I took him back the next day to have a check-up but they said it would be fine. His hand was quite red and angry, so they were worried he might have to have antibiotics.

“But it was just a deep scratch from the initial grab and they used iodine-soaked bandages. Two-year-olds are very resilient.

“He was crying when it happened and even when we were at the hospital he was clinging to me.

“We saw the same lady the following day and she was amazing. All the nurses came over and made a fuss over him.”

Mrs Bird, who is married to Liam, also 33, said she was told at the hospital that incidents like this involving kites were becoming more common.

“It seems to be happening because more people are feeding them,” she added. “I’ve heard the kites go through the bins at the school as well.

“They are supposed to be bouncing back, which I think is brilliant, but they do seem to be getting more brazen. I don’t know all the facts, so I wouldn’t want to discourage people from feeding them.

“It is a tough one because people think they are doing the right thing by supporting these beautiful creatures but they are big animals and they can fend for themselves.”

She said parents and carers should be on alert in case the same thing happened to them.

“I will certainly be more aware of it,” she said. “I love birds but I worry that if this happened to someone who didn’t like them what might happen.”

The Henley Standard has published a series of letters from readers about red kites.

Joyce Marriott, from Pyrton, said the birds were becoming an “unwelcome pest” and that the local population was getting out of control.

Enid Light, of Wargrave Road, Henley, described them as a beautiful bird, but said there were too many and they had become a pest.

In April, we reported that Karen Bridges, from Woodcote, had a sausage roll snatched from her hand while sitting on a bench in Hambleden.

The retired teacher said: “I didn’t see or hear it approaching but it slapped me quite a lot with its wings. It goes to show they’re becoming far too brave.”