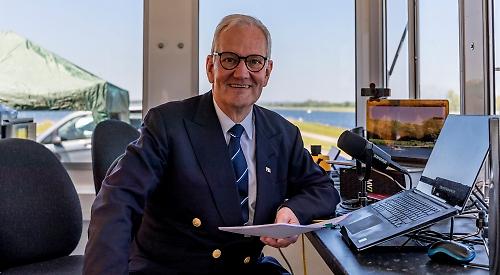 ROWING commentator Robert Treharne Jones will mark his 40th year behind the microphone by covering his fourth Olympic Games in Japan, which begin next Friday.

He says that while the host city of Japan hs been in a state of emergency due to covid-19, he feels the precautions that athletes and officials are required to take will provide a “reasonably safe” environment.

Dr Treharne Jones, a qualified GP, who lives in Middle Assendon, has already had a taste of what to expect when he commentated at the National Schools’ Regatta at Dorney Lake in May.

He says: “Within each car there was a driver and a commentator with plastic sheeting between the front and the back seats and when there was a change everything was sprayed.

“The race cameras were fixed to the roof of the car on tripods so you were not only driving the commentator but, to some extent, also determining the best images of the race.

“The audio-visual production team was not on site, they were more than 100 miles away so everything was being sent over to their studios in Wiltshire by 4G. In a normal year it would all be done on site with a two-storey commentary tower.”

Despite this he says the regatta was an opportunity for everybody to return to the sport they love, even if it was “radically different” without spectators.

“The onus was on us to try to give people that sense of occasion, no matter where you were watching it in the world,” he says.

“We added some ad hoc interviews with some of the main players and Sir Matthew Pinsent spoke about how, all those years ago, the schools’ regatta was the start of his rowing career. He made the very exciting point that he won there in 1988 and four years later he was standing in the middle of the Olympic podium in Barcelona.

“We had an interesting chat about whether we had seen any young athletes over he weekend who might do similar things at Paris or Los Angeles.”

Dr Treharne Jones, who is known as the “voice of rowing”, cut his teeth at the mic in 1981 at the international regatta at Holme Pierrepont in Nottingham, when he was in charge of press and publicity.

He had to step in as commentator after someone else pulled out and has been doing it ever since.

Dr Treharne Jones says: “When I started I had to jam a start sheet in the car windscreen as I drove myself along the course but now I have someone to drive me.”

He has been the senior race commentator with FISA, the international rowing federation, for about 20 years.

For 15 years he was a member of the BBC Radio 5 commentary team for the Boat Race and he has covered the world championships, commentating for Eurosport in Paris.

He was also press officer for Henley Royal Regatta for 15 years and press and publicity officer for Leander Club in Henley until 2019.

Dr Treharne Jones says: “I enjoy public speaking and I relish having a platform and something to say.

“I have done a lot of amateur dramatics and, actually, commentary is just a small part of dramatic performance. You give a lot of yourself physically and mentally and at the end you should feel absolutely exhausted.”

He has seen a lot of changes over the years with the way races are covered. “One of the things we used to do, if the course was in the middle of a lake, was to get driven along in a boat,” he says. “That was when I really felt part of the action. I was a lot closer to the crews than the umpires and you could sense this extreme physical effort.

“But then it was decided that both the umpires and the commentators were potentially creating wash so it doesn’t happen anymore.

“Now you have static commentators along the course, which is nothing like as satisfactory as it is not up with the race.

“I also don’t have to commentate in French or German anymore. When I first started, they said it would be good to do that so I taught myself the technical jargon.

“It was quite hard work to fit in the three languages. Now it has to be English and the local language. The local organising committee provides the local and World Rowing provides the English.”

Dr Treharne Jones has to tailor his commentary to audiences.

He explains: “For the National Schools’ Regatta the audience will include rowers from clubs and schools but also their parents, friends and family. For many parents, this would be their first experience of the sport so one of our responsibilities is to make sure they know what’s going on so, to some extent, we use basic terms.

“The same thing happened in 2012 with the Olympic regatta at Dorney. We were very aware that only a relatively small proportion of the crowd knew what rowing was about, such as what the difference is between a four and a quad, or what is the role of an umpire or why does it look so easy when it is jolly hard? Part of our agenda was also telling people about the venue and to explain how rowing is an immensely inclusive sport.”

At previous Olympics he would try to soak up some of the culture but this time around covid restrictions will prevent this. Dr Treharne Jones says: “I have had both jabs and we have been given a play book as to what we can and cannot do.

“In common with the athletes, we will be allowed in the venue and the hotel and to travel between the two.

“There’s no going out to eat in the evenings, no sightseeing and that’s very disappointing because I like to get out and about.

“We will all arrive, do our jobs, and then leave immediately when the racing is over. The athletes won’t be able to see any of the other events or party. It will be a very different experience.”

Dr Treharne Jones is confident the GB rowers will be bringing home a haul of medals.

“I am now extremely optimistic. We have a fighting chance.”

As for himself, he hopes to continue commentating after Tokyo.

He says: “If someone had said to me when I started that I would be doing it 40 years later I certainly would have been surprised and even more so if they’d told me I’d be doing my fourth Olympics.

“What still enjoy doing is training new people and I’d like that to be part of my legacy.

“I would prefer to go before I am pushed but I like to think there is life in the old dog yet.”