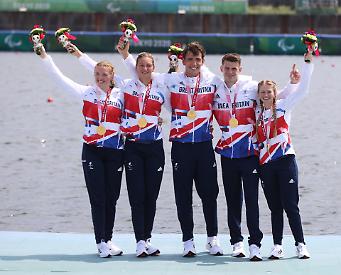 THREE paralympic rowers from Henley have been made MBEs in the New Year’s Honours list.

Ellen Buttrick, Giedre Rakauskaite and Erin Kennedy, who all won gold in the Tokyo 2020 Paralympic Games as part of the PR3 mixed coxed four with James Fox and Oliver Stanhope, have received the award for their services to rowing.

In the final they beat the USA by 11 seconds but their hopes of setting a world record were dashed by the windy conditions.

Buttrick, of Albert Road, started rowing at the age of 17 with Leeds Rowing Club and has since won two gold medals at the World Championships and one gold medal in the European Championships in the same PR3 mixed coxed four.

The 26-year-old, originally from Leeds, said she was hoping to get an MBE after the crew’s success in Japan.

She said: “I was waiting and hoping and I was so excited when the letter arrived. I’m so happy and I think it’s great. I was looking at people who receive MBEs and I can’t believe I got one so young so hopefully it just means we’re taken more seriously.”

Rakauskaite, of Highlands Park off Greys Road, started rowing at the age of 14 but immediately had to take a break due to a leg injury from a car crash.

After the incident she rowed for Worcester University and won a silver medal at the British Rowing Indoor Championships in 2015.

Rakauskaite, originally from Kaunas in Lithuania, said she was shocked about the award but feels “incredibly honoured”.

She said: “I opened the letter thinking, ‘Oh my God what is it going to say?’ and I couldn’t believe it. I was mainly shocked but now I feel really honoured, it’s such a privilege and I’m very excited as well for the ceremony and getting to meet royalty.”

Kennedy, of Station Road, has been a coxswain for about 11 years after starting at Pembroke College in Oxford University where she studied History and English.

The 29-year-old, originally from Wantage, joined Leander Club after winning the Women’s Boat Race between Oxford University and Cambridge University in 2014 by four lengths.

She said: “Rowing is something I feel very lucky to be able to do as my job as it’s my hobby and something I like. To do it as my job is already a privilege so this really is the cherry on top.

Stanhope, 23 from Hampton, was also awarded an MBE and Fox, of Hart Street, was made an MBE in 2017 for his services to sport.

Michael Sharrock, the chief executive of the British Paralympic Association, also received an award for his services to athletes with disabilities.

Mr Sharrock, of Checkendon, has been CEO since January 2019 and has been given an OBE. Previously he worked for BP, a British oil and gas company, for about 30 years and led the company's partnership with the London 2012 Olympic and Paralympic Games.

Meanwhile, the lately chief commercial officer of NHS England and NHS Improvement has been given a DBE.

Emily Lawson, a molecular geneticist from Henley, received the award for her services to the NHS, particularly during the coronavirus pandemic. She ran the first phase of the vaccine programme before being seconded to Downing Street as head of the Prime Minister’s delivery unit.

She said: “I am honoured and delighted to be recognised on behalf of the army of dedicated and hardworking staff and volunteers who have delivered the biggest and most successful vaccination programme in health service history.

“It has been the greatest privilege to see first-hand the amazing work done at vaccination sites and to speak to so many staff and volunteers.  I’m so grateful to all of them and to everyone who has supported the programme.”

Henley film director Paul Greengrass, who directed three instalments in the Jason Bourne series, has been given a CBE for his services to the arts.

The 66-year-old also directed the BAFTA-nominated United 93, a dramatisation of events on board that flight during the September 11 hijackings, and Bloody Sunday, which re-enacted the infamous shootings in Northern Ireland in 1972.

An OBE has been given to the chief executive of The Orders of St John Care Trust, which owns Chilterns Court care home in York Road.

Dan Hayes, who joined the trust 19 years ago as an HR manager before becoming chief executive in 2015, was given the award for his services to the social care sector.

He said: “I am absolutely delighted to receive this recognition but also clear that the award would not have been made if I hadn’t been fortunate enough to spend my social care career with OSJCT. It’s my great good fortune to represent literally thousands of OSJCT colleagues who deserve similar recognition for what they continue to do and who have carried me to the honour.

“In the truest sense this OBE is for them and it is in recognition of the lives they make better through their love and professionalism every day.”

The editor of the Henley Standard has been awarded a BEM for his services to the community in Henley during the coronavirus pandemic.

Simon Bradshaw, 62, of Kidmore Road in Caversham, became editor in the summer of 2008 and continued working on the paper throughout the lockdown last year.

He said: “Editor Gets Award Shock could have been my headline when I got the news. It was completely unexpected but a real fillip for everyone here in the editorial department who works so hard to bring you your local paper every week, come what may.

“Even a global pandemic couldn’t stop us. And I like to think we did our bit – along with all the countless others – to show our locked-down readers that they were not alone and that there were still plenty of good things in the world.

“I’d especially like to thank the readers who stuck with us when everything we rely on to fill our paper simply stopped. Some of you even helped by contributing your own stories and pictures. Thank you all.”