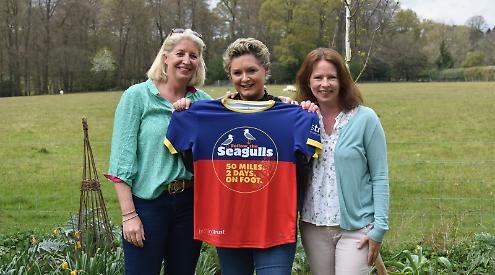 A WOMAN who was successfully treated for a brain tumour is walking almost two marathons in two days to raise money for charity.

This weekend Sarah Hollins, from Rotherfield Greys, will walk 50 miles along the Devon coastline with friends Mel Howarth and Charlotte Pudney.

They are raising money for Brains Trust, which supports and provides resources so that people with a brain tumour and their loved ones can live the life they want after diagnosis.

Mrs Hollins, 46, who lives in Rocky Lane with her husband Chris and children George, seven, and Grace, six, said: “It has been a challenging time for a lot of people, I don’t think I’m particularly special — I just wanted to do something to help people who are going through the same experience.” She was diagnosed with a brain tumour nine months after she gave birth to George.

Mrs Hollins, who works as a media consultant, said: “After I had our son George, the brain fog didn’t seem to lift so I was referred for a brain scan.

“I was told that I had a golf ball- sized tumour in my left frontal lobe. A week later, I found out I was pregnant with our daughter Grace.

“They suspected it was benign and my consultant suggested that we watch and wait until the children grew up a bit and had become a bit more independent before I had an operation to remove it – they knew they had to operate at some point.

“Due to covid I couldn’t have my regular scans and I went 18 months without a scan.”

In April last year, she started to notice that her concentration levels were poor and that she had difficulty finding words.

She said: “Just before covid, I went back to university because I wanted to retrain as a nurse. When you become a mum, you are afraid you are going to lose a bit of your identity and I wanted a new challenge, I wanted to help people. I was getting really good feedback on my practical examinations but when it came to writing essays I was lost for words.

“I didn’t understand why I couldn’t get good marks and I knew something wasn’t right. My consultant called me in for a scan and it wasn’t good news.

“I had a significant swelling on my brain caused by the tumour, which was pushing the left side of my brain onto my right so the operation was brought forward.”

She was admitted to the National Hospital for Neurology and Neurosurgery in London for a craniotomy to remove the tumour and was put into an induced coma for a week to recover.

She returned home to her family after recuperating for a couple more weeks in hospital and was told that her recovery would be slow.

She said: “I came home and I didn’t feel quite right. I had to physically crawl up the stairs on my hands and knees and I couldn't even walk to our front gate.” A week later, she was readmitted with a bleed to the brain and underwent her second craniotomy within a month.

She said: “I was really scared I was not going to wake up this second time.

“I had an all-female team taking care of me and they were amazing – when I woke up in the acute ward I was surrounded by women of all ages and all backgrounds which were going through a similar experience.

“That’s when I realised brain tumours can affect anyone, any age and any background. This was my second time around and I was more determined than ever to get out of the hospital as soon as I could.

“Brains Trust is a very holistic charity — they offer support for patients and their loved ones but they also fund research as well which is very important.

“I came out and I wanted to do something to help other people. I was one of the lucky ones and some of the other women that I met on that ward were not as lucky.”

Mrs Hollins moved with her parents Bill and Dee Alexander from Leicestershire to Henley when she was 14.

She studied classics at Durham University where she met Mr Hollins’ sister Liz, who eventually introduced them. They met again when they both worked for the BBC in London, where Mr Hollins was a sports presenter and she worked in marketing.

She said: “During the operations Chris continued working and kept the children going.

“He doesn’t talk about it a lot – I think he was very scared too but didn’t show it, he was trying not to think about the consequences.”

Mr Hollins, 51, said: “Finding out about the tumour was really strange and the first advice we got was to leave it and hope that it was not going to get any bigger.

“It’s a bit of a weird situation when a consultant is talking to both of you but you know the operation is not going to happen to you and it’s not your choice to make.

“It’s a totally different thing and a life-changing one. Fortunately the children were blissfully unaware of what was going on.

“The whole process was a bit of a shock and the operation itself happened in covid times, which means we wouldn’t see her.

“You drop off your wife, the mother of your children, to the hospital and you know you are not going to see her for 10 days and that was just awful.”

Mrs Hollins said: “After the operation, I was scared that my children could be taken away from me and all I could think in the hospital was that I needed to get out for my children.

“I kept thinking about a quote from the children’s book We are Going on a Bear Hunt: ‘We can’t go over it. We can’t go under it. Oh, no! We’ve got to go through it’ and I kept telling myself that.”

Now she is about to embark on her fundraising challenge.

She said: “Six months after my operation, I’ve got two amazing friends that have agreed to do this with me – they understand it was quite scary, especially as a mum.”

The women have already raised more than £1,500 for the charity and hope to double that amount by the end of the challenge.

They have been training on footpaths in and around Henley, Sonning, Stoke Row and Hambleden to get ready for the two marathons.

Mel Howarth, 50, who lives in Peppard Common with her daughters Poppy, seven and Immy, five, said: “Sarah is a loyal friend who has been going through an awful lot and we wanted to support her and help her raise as much money as possible for a charity which is very close to her heart at the moment.

“It’s a very worthwhile cause and it has been really nice to get outside and explore new walks in the Henley area to train for this challenge.

“We have already reached our initial fundraising goal but we hope we can double it, that would be just amazing.”

Charlotte Pudney, 50, who also lives in Peppard Common with her daughter Amelie, five, said: “Sarah has gone through a horrible time and has been incredibly brave and stoic about it and I wanted to do anything I could to support her.

“I know the charity has been very supportive, especially with post-treatment care to help her after what she has been through.”

She continued: “She has been so positive throughout and put on a brave face even when it wasn’t easy. It’s a terrible thing for people and their family to experience and we want to raise funds to help out.”

On Saturday the intrepid trio will join other walkers for the Follow The Seagulls fundraising trek organised by the charity.

The 50-mile route will start in Dartmouth in South Devon and take them along one of the most spectacular coastlines in England following the South-West Coastal Path.

Similar walks raising money for the charity will also be taking place at the same time at other locations across the country, including the Isle of Wight, Whitby in North Yorkshire and the Fife Coastal Path in Scotland.

Brains Trust provides personal 24/7 support from the point of diagnosis onwards and builds resources that help people with a brain tumour become stronger.

The charity works with hospitals to secure the best care possible for people and campaigns for the brain tumour community to help solve the real issues they face.