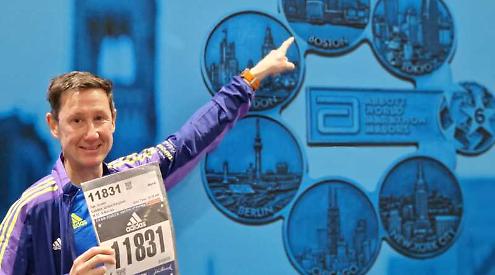 A RUNNER who recently completed all the major marathons around the world can’t wait to pass through Henley this weekend in his latest challenge.

The non-stop running event from Richmond to Oxford stops off in town at the half-way point where he is looking forward to seeing his mother, Marlis, who lives in Meadow Road.

She is 88 years of age, has been unable to watch her son race for about 10 years and is now being treated for bladder cancer.

Gower said: “My mum lives few hundred metres from the bandstand where there will be an aid station at the halfway point of the run.

“She rarely goes out these days and she hasn’t seen me run for probably eight to 10 years so it will means so much to see her and will give me a monumental boost.

“My brother and his with and my nephews will be there, too, and I hope to be able to complete the run in under 24 hours, hopefully about 22 hours.”

Gower grew up in Henley, living in Valley Road and attending the primary school in the same street until the age of six when he, his older brother Axel and parents moved to a farm in Wales.

He said: “I went to Valley Road Primary School but I didn’t go to secondary school in Henley as we moved to Wales as my parents wanted to have a crack at self-sufficiency. We had cows, horses, ducks and other animals.

“Then, after about three years we moved to Poole in Dorset as my parents wanted to build a yacht. They didn’t get around the world but they went to some interesting places.”

Gower later moved to London with his brother and now lives in Herne Hill with wife Julie, who works in healthcare and their children Olivia 21 and William 16.

He had been a smoker since the age of 13 but got a shock when his father Michael, a lifelong smoker, died from lung cancer in 2001, aged 66.

Gower said: “Dad had run the very first London Marathon in 1981 and I vividly remember watching him in the pouring rain on Constitution Hill where the race used to finish. Dad was a lifelong smoker and although he had quit a couple of years before, it was sadly too late.

“As a kid I loved running and was the sporty one, a member of every sports team at school. Then aged 13, I started smoking and spent over 25 years trying to stop without success, even after dad died.

“But I never stopped trying and as I turned 40, I vowed to quit smoking, get fit again and run a marathon to fundraise for Cancer Research UK. I walked into a local stop smoking clinic and I had my last smoke in November 2009.

Indeed, Gower completed the Boston Marathon on Easter Monday to secure him the coveted “Six Star Medal” from the Abbott World Marathon Major.

This is awarded to runners who have completed all the world major marathons including London, Berlin, New York, Chicago and Tokyo, as well as Boston. Only about 7,000 people have done all six.

Gower, who is nicknamed the Forrest Gump of Herne Hill, said: “I have done about 30 marathons over the years, from Havana in Cuba and Valencia in Spain and in Lithuania and have raised more than £60,000.

“Last year I did, in October, I did the Marathon de Sables, which means the marathon of sand, which takes place in the Sahara desert. Half of the people didn’t finish and one guy died.

“I was originally meant to run the Boston Marathon in April 2020 but it was kyboshed because of covid.

“Boston is the oldest marathon in the world and for runners it is considered as the runners’ marathon, the one that runners want to do.

“It is also a difficult course. It is quite hilly with four hills of between 16 and 20 miles. The last one is called Heartbreak Hill, it is known as being tough.

“I also got a personal best, finishing in three hours, two minutes and 35 seconds. Even though I am getting older I am getting quicker. I am 52 and it was a massive improvement on my previous best by 10 minutes.

“I was absolutely over the moon to finish and complete the six major marathons. My wife came with me and I had friends who flew up from Atlanta so it was a feeling and I felt so proud but I have the big one through Henley to come and to have my Mum there will be super special.”

Gower, who trains at least five times a week, is an ambassador for Cancer Research UK. To sponsor him, visit www.justgiving.com/gowertan2022.