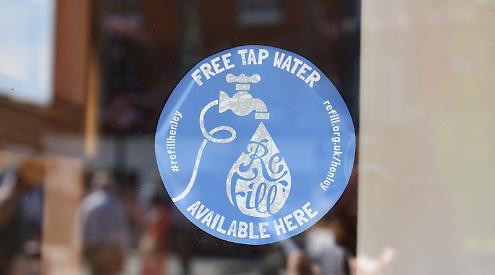 CAMPAIGNERS are encouraging businesses in Henley to support Refill.

This is a national initiative which seeks to make the refilling of water bottles as easy, convenient and cheap as possible by introducing refill points on every street.

Refill says this will help to reduce the amount of plastic being thrown away.

In Henley, the campaign is being led by town councillor Sarah Miller and environmental consultant Julia Carey, who had a stall in Market Place on Thursday last week.

Councillor Miller said: “This is more of a refresher to get the word out again and get more businesses to sign up.

“We have lost businesses that have moved on, so we wanted to remind people that Refill Henley is still here. It’s about educating people.”

Mrs Carey, who won the waste recycling and reduction award in the inaugural Henley Heroes awards in 2018, said more people were becoming interested in looking after the environment, especially young people. She said: “It’s just so satisfying to see things improving. Kids are using refillable water bottles and there’s the charge for plastic bags in supermarkets.

“Since I was little I’ve been picking up litter and when I came to Henley and saw how beautiful it was, becoming a campaigner for clean water and no plastic just made sense.”

Gail’s Bakery, which opened in Market Place last month, has signed up to Refill, taking the total number of town businesses involved to 21.

All have a blue sticker in their windows to tell passers-by that they can refill their water bottles inside.

The bakery doesn’t have a sticker due to company policy but will still provide free tap water.

“We think the Refill initiative is a great idea as it’s not available everywhere and it’s especially important now with the very hot weather we’re getting.”

Cllr Miller and Mrs Carey, who both live in Reading Road, set up the Henley Plastic Reduction page on Facebook in 2017 to engage with residents and businesses. It now has more than 800 members.

Cllr Miller now wants to install a water fountain in Market Place like the one in Marlow.

She said: “It seems silly that we don’t have one when they are all over the country now. It doesn’t have to be some garish fountain, just a simple place for people to fill their bottles.

“I want to see it this year, especially since climate is changing so quickly — it’s hotter for longer.

“On a day like this it would be very well used and people I’ve spoken to are very keen for it to happen.”