Author says we all got Wallis Simpson wrong 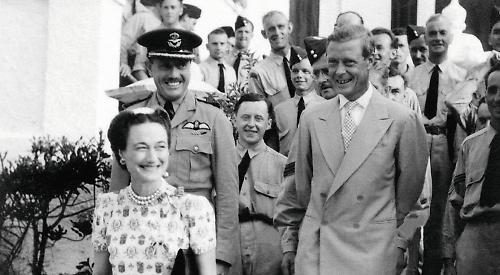 IT was the biggest constitutional crisis since Henry VIII divorced Catherine of Aragon — except this time everyone was agreed on who the villain of the piece was.

Wallis had been Edward’s mistress since January 1934, but thanks to the deference of the media it took nearly three years for their relationship to become public knowledge.

George V had died in January 1936 and that summer Edward and Wallis holidayed together in the Mediterranean — a marked change of routine from the monarch’s traditional stay at Balmoral.

By October it was rumoured in high society and abroad that Edward intended to marry Wallis as soon as she was free to do so.

The situation prompted the King’s private secretary Alec Hardinge to write to him on November 13, warning that “the silence in the British press on the subject of Your Majesty’s friendship with Mrs Simpson is not going to be maintained ... judging by the letters from British subjects living in foreign countries where the press has been outspoken, the effect will be calamitous.”

So it proved, and Wallis’s name has largely been mud ever since.

But now a journalist and author based in Hambleden has ventured to write what her publishers say is the first positive biography of Wallis Simpson — an intimate portrait of one of the most misunderstood women in the history of the British royal family.

Three years ago she delved into her own family background to write Lara: The Untold Love Story That Inspired Doctor Zhivago, about her great-uncle Boris Pasternak’s mistress Olga Ivinskaya.

The book was critically acclaimed, and its success inadvertently gave rise to her latest volume, Untitled: The Real Wallis Simpson, Duchess of Windsor, which was published yesterday (Thursday).

“It definitely came out of doing Lara,” says Anna. “Because when Lara was reviewed all the critics said I had rehabilitated Boris Pasternak’s mistress and muse and that I was the first person to do so — and I realised then that I wanted to spend my career rehabilitating women whom history had treated badly.

“I was kind of waiting for the right woman to come along. And then the news broke that Meghan Markle was going out with Prince Harry and that suddenly made me think of Wallis Simpson.

“I thought, gosh, I couldn’t find a woman who is more in need of rehabilitating than Wallis Simpson, so that gave me the idea.”

Anna’s book seeks to show that contrary to her public image, Wallis Simpson was a warm, loyal and intelligent woman who was adored by her friends. Far from being the villain of the abdication, she was the victim.

But surely as a twice-married woman of the world, Wallis had found herself in that position as a result of her own free will?

“The thing about Wallis is she got in too deep too quickly,” says Anna. “It never occurred to her that Edward wouldn’t break off the affair and have to marry an eligible bride — and then she would stay married to Ernest Simpson. She was in a sense trapped by this man, by this besotted king. And I think that was incredibly difficult for her.”

Could she not simply have left Edward in 1936, if she didn’t like the way things were going?

“She did, she tried, she absolutely tried. Throughout my book I detail her many attempts to try and leave him. In the Easter of 1936, Edward took Wallis and Ernest to the Duchy of Cornwall to see the rhododendrons and he started giving her these incredibly lavish gifts and she realised that Ernest was put out by this — it was a very valuable bracelet he gave her. And she wrote him this letter after the holiday saying ‘Look, we cannot trample on people’s feelings like this. We must break up.’

“She absolutely tried to break it off by letter and in person, and I think it’s difficult in the context of today to fully appreciate the nature of his obsessive narcissism and neediness. As Churchill said, she was his oxygen — and he wasn’t going to let that go.

“The other thing that people don’t realise today is that the story was under a media blackout, so the country at large knew nothing of their relationship — although obviously their society friends knew — until 10 days before he abdicated.

“He by this point was so deranged with his exhaustion and obsession with her that he slept with a loaded pistol under his pillow and he threatened to kill himself. And she knew he was quite capable of that and she said to the royal courtiers, you know, we’d have a far bigger problem on our hands [if that happened]. She would be even more reviled if she was responsible for the death of this man.

Whatever people think of Wallis now, with hindsight you could say she did the country a favour, given that her involvement with Edward indirectly led to the reign of our present Queen?

“Absolutely,” says Anna. “It was Noël Coward who said there should be a statue of her [Wallis] on every village green in England. I completely agree that the Queen has been a superb monarch and we wouldn’t have had that without Wallis. Although, saying that, both Edward and Wallis had fertility issues and it’s very unlikely that even if he had stayed on the throne he would have produced an heir. So we could have seen a similar course of history but for a different set of reasons.”

• Untitled: The Real Wallis Simpson, Duchess of Windsor is published by William Collins, priced £20. Anna Pasternak will be appearing at this year’s Henley Literary Festival.