Lear’s tragic descent is a mirror for our troubled times 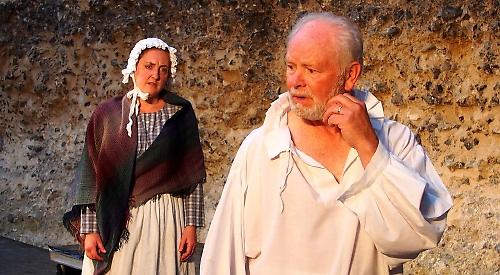 Helen Wernham’s costume design is reminiscent of another play about a mad king, Alan Bennett’s The Madness of King George III, no doubt a planned piece of intertextuality.

But there is conflict on the micro level too, since at the heart of the play is a rotten family dynamic.

Foolish Lear (Barrie Armstrong) demands a profession of love from his three daughters as a basis on which to bestow his kingdom.

Goneril (Stephanie Gunner-Lucas) and Regan (Rebecca Douglas) are unctuous in their declarations of love, but later fierce and chilling in their hostility to their father.

Abbey Gillett is both soft and steely as the candid Cordelia, who is castigated for her apparent lack of filial love.

Lear is characterised as lamentably reckless, but Armstrong’s performance as the misguided but open-hearted king is highly engaging.

His sympathetic portrayal has us agreeing that Lear is “more sinned against than sinning”.

Armstrong’s disintegration is especially moving set against the unyielding demeanour of Gunner-Lucas and Douglas.

Puzzled from the first, he descends into disappointment, anger and madness.

Jeremy Radburn ably plays the loyal courtier, Gloucester, who amplifies the parenthood theme because, having made grave errors of judgment himself, he too is forced to reconsider his relationship with his children.

He is cruelly punished for his fidelity to the king — another example of how the audience is made to wince at the unjust treatment of the good guys in this play.

Lear has other loyal followers. Kent, in this production, is cast as a woman and Kate Shaw carries herself well in the role.

The fool and Cordelia are both characters who speak honestly to Lear, so, in a clever piece of casting, Abbey Gillett plays the jester to the king as well as the “foolish” daughter Cordelia. Gillett has to be versatile to manage both parts — and she is superb throughout.

I could write more about the villains of the piece, but the one I want to mention is the immoral servant, Oswald. It’s a relatively minor role, but Tanvi Virmani plays the part with such mischievous relish that she makes a big impression.

The setting for this production is outstanding. Reading Abbey is majestic, old and in ruins — just like the central character of Lear himself.

King Lear by the Progress Theatre is a treat for the eyes, ears, intellect and emotions. It’s a fantastic production in a fantastic location. Don’t miss it!