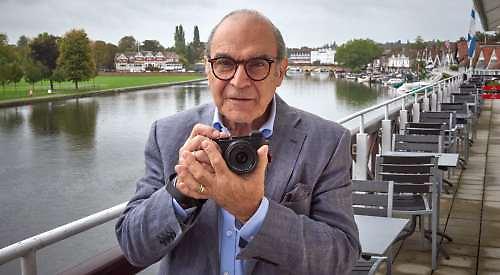 A RAPTUROUS reception greeted acclaimed actor David Suchet as he arrived to discuss his recently published book Behind the Lens with theatre journalist Al Senter.

Al asked David why he’d decided to “let his photographs do the talking”. David said Behind the Lens was a photo memoir rather than an autobiography as he has an aversion to writing about himself.

Although he’s played many different characters in his career — including Poirot, for which he always gets a round of applause, and did on this occasion too — in his words, “That’s not me.”

David hopes the book will enable people to get to know the man behind the characters — firstly, through his photographs, by showing the way he sees things; secondly, by speaking directly to the reader (the book was recorded and then converted to text) about the important things in his life — family, music, what makes him choose roles.

Al asked David how he first became interested in photography. David said it was through his grandfather, the Fleet Street photographer James Jarché (the man who took the first photograph of Wallis Simpson and Edward VIII together).

His grandfather taught him about technique, but also that the most important skill was “learning to look”.

David said his photographs are always an emotional reaction to something. As he put it, something that makes him go “Ooh” — whether a person, an object or a landscape.

Over the next hour, David also talked about his early career, dealing with rejection, how he goes about preparing for roles, his admiration for the work of playwright Arthur Miller, and his interest in theology and the early history of the Christian church.

Audience questions included David’s favourite photographs in the book and his feelings about an age where just about everyone has a camera on their phone.

Responding to the latter, he said: “If you’ve always got a camera with you, you’ve got a chance of turning banality into something artistic and special.” An answer characteristic of this thoughtful, eloquent and fascinating speaker.

Afterwards, audience members rushed to purchase the book and, like me, joined the long queue waiting to have David sign their copy, to exchange a few words with him, and, for a lucky few, to have their photograph taken alongside him.

All royalties from David’s book will go to The Tuberous Sclerosis Association, the incurable condition from which his grandson suffers.