Author swears bad words have always been with us 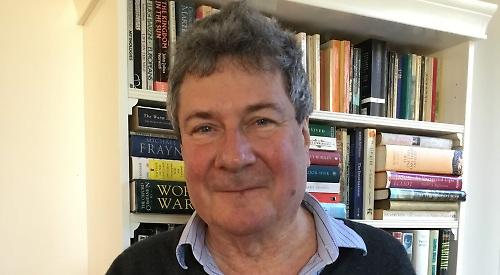 ANYONE who has ever ventured an opinion in public will know the feeling of being hemmed in by what it is and is not socially acceptable to say.

Back in June the comedian Jo Brand found herself at the centre of a social media storm after a joke she made about “milkshaking” was broadcast on BBC Radio 4’s Heresy programme.

She had told the show’s presenter Victoria Coren Mitchell: “Certain unpleasant characters are being thrown to the fore and they’re very, very easy to hate. And I’m kind of thinking, ‘Why bother with a milkshake when you could get some battery acid?’”

Having been booked to appear at a Henley Literary Festival pop-up event at Christ Church two days later, Brand took the opportunity to “humbly apologise” for what she said had been “crass”, “insensitive” and “tasteless” remarks.

Her words were widely reported and the apology succeeded in defusing the situation.

But when even an experienced wordsmith like Jo Brand can unexpectedly find herself on the wrong side of public opinion, what hope is there for the rest of us?

Coverage of the recent general election campaign saw Channel 4 claim that Boris Johnson had used the phrase “people of colour” when in fact the former Henley MP had said “people of talent”. The broadcaster later apologised.

Now a new book that aims to shed some much-needed light on taboo words and expressions and how they change over time is to be the subject of a talk by the author at Henley Library later this month.

Philip Gooden, who lives in Holton near Oxford, is known to Henley Standard readers as a reviewer of theatre, exhibitions, and events at the Henley and Cliveden literary festivals.

An author of fiction and non-fiction, his previous books on language include Who’s Whose?, The Story of English and the award-winning Faux Pas?

Mr Gooden is due to speak about his latest book, Bad Words: And What They Say About Us at the library in Ravenscroft Road at 6pm on Monday, January 27. Admission is free and all are welcome.

A spokesman for the book’s publishers, Robinson, said: “Once upon a time, the worst words we could utter were short, simple and tended to be four letters in length. Now things are more complicated.

“To be insulted as a ‘snowflake’ or an ‘expert’ is arguably worse than being called a **** or a **** or even a ****. So what are today’s ‘bad words’ and how are they different from yesterday’s taboo expressions?

“This entertaining guide to the shifting sands of bad language is indispensable in an increasingly divided world in which abuse becomes ever more widespread and vituperative.

“Philip Gooden shows how and why taboo words and contentious expressions, including those four-letter ones, were first used in English.

“He discusses the ways such words have changed over the years and explores how a single syllable or two may possess an almost magical power to offend, distress or infuriate.

“Bad Words investigates the most controversial and provocative words in the English language in a way that is both anecdotal and analytical. Combining intrigue and scandal, the book delves into expressions connected to religion, ethnicity, nationality, politics, swearing and oaths, and includes contemporary issues like political correctness and elitism.”

Speaking at Blackwell’s bookshop in Oxford last month, Mr Gooden said the idea for the book had been inspired by looking back on the theatre critic Kenneth Tynan’s notorious use of the F-word on television in 1965.

He told the audience: “Although this took place at something like 10.30pm at night, it caused the most extraordinary furore. There were headlines in the newspapers, there were questions in parliament, there were demands that Tynan be removed from his job at the National Theatre, where he was working with Laurence Olivier, and so on.

“And yet that very same word which Tynan had the temerity to utter, quite deliberately, quite intentionally, in 1965, can now be heard pretty constantly on the television after 9pm, certainly on Channel 4, certainly on BBC Two, on BBC Four, and quite frequently on BBC One and ITV. It can be read in several newspapers and it can be found scattered through much writing.

“And it interested me to ask myself why and how had this great change come about in a word that half a century ago was so taboo that to say it aloud on television would cause questions in parliament.

“Why had that become normalised when other words which 50 years ago were quite acceptable, which we didn’t think about, but now when used are dangerous and perhaps for the speaker could be considered toxic in some ways? And I also asked myself, how does this change in the use of taboo words reflect back on us as a society.”

Asked if he thought the number of things that are effectively unsayable had grown over the years, Mr Gooden said: “The mass media have expanded the potential to offend and be offended, especially in a Twitter age, but I’m not sure they have added to the total stock of ‘unsayable’ things.

“My impression is that there is a pool of taboo or at the least vulgar expressions and that it stays at a fairly constant level. If one word is taken out, then a different one may be added. For example, the Times will use ‘s**t’ fairly freely, and not just in quotes, which wouldn’t have been the case a few years ago. But they will be more careful over terminology to do with race and now gender.”

Of all the “bad words” in his book, which had he found the most enjoyable to write about and why?

“I enjoyed doing research on ‘gay’ and ‘queer’ because these are ambiguous words with double lives, and trying to pin down the moment when the covert meaning went mainstream is an interesting task. Also writing about elites and the establishment because these are such topical concerns.”

• Mr Gooden’s talk on January 27 will be followed by a question and answer session. Henley Library has asked that people looking to attend speak to a member of staff or call 01865 815278 to book their place.