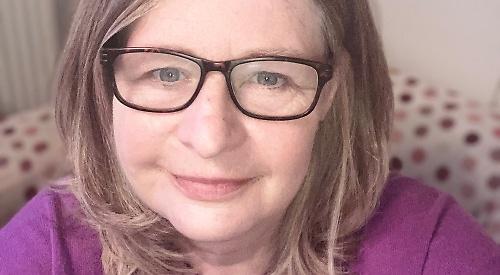 A HENLEY author whose first book was nominated for a Romantic Novelists’ Association award is branching out into historical fiction under a different name.

Kirsten Hesketh’s 2020 debut Another Us was also longlisted for the Guardian’s Not the Booker Prize.

Set in Hambley, a fictional town not unlike Henley, the book told the story of a couple whose ailing marriage is further challenged when their youngest son is diagnosed with Asperger’s.

Kirsten, of Greys Hill, says the book has met with a very positive response from readers.

She says: “One of the things that stuns me is that with Twitter and everything else people direct message you all the time about your book and that’s lovely.

“People will say, ‘I’ve got a child who’s about to be diagnosed with autism and your book gave me hope’ or ‘I know nothing about autism but it was very interesting’.

“That has been one of the best things about being published, actually, people getting in touch.”

With nearly 6,000 followers on Twitter, Kirsten has also been able to go public with her new authorial alias, Poppy Cooper, whose The Post Office Girls was published yesterday (Thursday).

Set in 1915, the book introduces us to Beth Healey, who is just about to turn 18. On the day of her birthday she hopes she will be able to forget the ghastly war and celebrate.

But that evening her twin brother Ned announces that he has signed up to fight.

No longer able to stand working in her parents’ village shop while others are doing their bit, Beth applies to join the Army Post Office’s purpose-built Home Depot in Regent’s Park — and is astounded to be accepted.

There she and her new colleagues Milly and Nora will be responsible for making sure that letters and parcels get through to the troops on the front line.

The Post Office Girls is the first in a projected series of novels, with the second book, A Post Office Christmas, due out at the end of November.

Kirsten, 58, reveals the “Poppy” part of her pseudonym relates to the book’s wartime setting.

“That came from the publishers, to be honest,” she says. “Because my real name has been used for contemporary fiction I have to have a different name for my historical work — and I think because it was a different publisher as well. But I wanted people to know that I was Poppy Cooper and the publisher agreed with that — it’s not like an anonymous thing.”

Despite one of her grandfathers having worked at the Mount Pleasant sorting office in central London, Kirsten said that until quite recently she was unaware of the existence of the Army Post Office and the Home Depot.

“I only stumbled across it because of all the publicity to do with 100 years since the First World War,” she says.

“Because there was so much mail being sent to all the troops at the front they couldn’t cope with it through the normal sorting channels.

“They needed thousands of people to censor the mail, to check the mail, to sort it — and so that’s where the story is set.”

Appropriately enough, Kirsten’s first spark of inspiration for The Post Office Girls came from a 2017 set of commemorative stamps.

She explains: “One of them was of a bunch of soldiers standing on a big pile of sacks in a wooden building called the Home Depot, so I looked it up and then I found a whole load of other photos.

“There was one of some women sitting at a table basically mending broken parcels.

“Because the front was so close and the post was so fast in those days you could send something in the morning and it would get to France that afternoon.

“People used to make a cake and cut a couple of slices off and send it to somebody at the front. They even used to send a portion of roast dinner off.

“Obviously their wrapping materials weren’t brilliant, so you’d get these repackaged sort of oozing parcels.”

After the war, the Home Depot was dismantled and, despite the enormous scale of the enterprise, Kirsten found that relatively little about it had survived.

“I read somewhere that the whole building had gone by the Twenties and it went back to being a park, so there’s nothing there now, it’s just a sort of field,” she says.

“Somebody involved with the royal parks wrote about what all of them did in the First World War and he said there was nothing left. It was just sort of ‘Thanks very much for your help during the war and off you go’.”