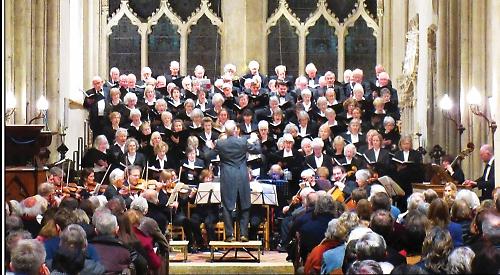 THE Benson Choral Society always draws a large audience to fill the cavernous Dorchester Abbey and this occasion was no exception — but one wonders if they chose the right piece to perform at this particular venue.

JS Bach’s St John Passion is quite an intimate work scored for relatively small instrumental resources (no brass) and originally written for the quiet gamba strings with wooden flutes and oboes (no bassoons).

The ensemble was fronted by five able vocal soloists and literally backed up, on this occasion, by the 86-strong choir towering on tiered seats behind the small orchestra.

While every word sung by the soloists was clearly audible, those emanating from the choir were not.

The Benson choir is an experienced ensemble, competent and well trained. Their diction is not normally called into question, but the abbey’s acoustics did not work in their favour on this occasion.

The famous Bach chorales — slow, simple chants — were exceptionally well balanced between sections of the choir but lacked essential verbal clarity even though Maestro Christopher Walker’s directions were as precise as ever and the choir’s alertness to them was clearly visible. In all other respects this was a masterly performance with much to be savoured.

The demanding role of the Evangelist, who tells the story of Jesus’ trial and crucifixion, was sung by the tenor Ben Alden with simplicity, great clarity and conviction.

His voice was unforced and as strong at the end of the performance as it had been at the beginning.

The role of Pilate was taken over at very short notice by the bass Philip Tebb. He gave a rich and powerful account of Pilate’s interrogation of Jesus, whose responses were sung by the bass baritone Timothy Murphy calmly and with the self-assurance that the role demands.

The soprano Helen Meyerhoff and mezzo-soprano Carris Jones completed the soloists’ line-up, with Jones’s mournful aria It is fulfilled being perhaps the most deeply moving account of the evening.

The excellent Elgar Orchestra was ably led by Ron Colyer, but it was their principal cellist Lorna Taylor who was called upon by Maestro Walker to take a final bow along with the soloists.

Her beautiful cello solos and complete mastery of the art of sensitive continuo playing made a sustained and most telling contribution to the evening.

The society’s next concert at Dorchester Abbey on Saturday, June 10, features three works by Beethoven which, one can predict, should be more appealing to the acoustic ghosts that haunt this ancient edifice.