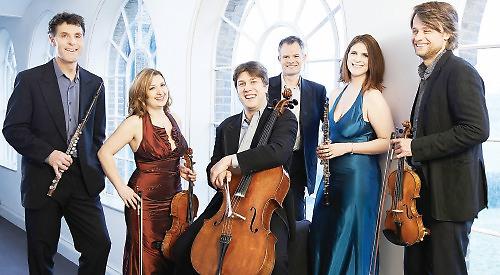 PROMOTED as part of the Classical Music Alive in Reading series, this concert — given by four exceptionally talented soloists — was both innovative and very entertaining.

The start was inauspicious. The cellist Thomas Carroll announced that he would play Bach’s Cello Suite No 1 in G from the back of the stage to “take full advantage of the hall’s excellent acoustics”.

Unfortunately, much of his fast passage work became lost in reverberation from the bass line. In retrospect, the performance might have met with better appreciation from the audience if it had been delivered from the front of the stage and at a more accommodating pace.

Mr Carroll amply redeemed himself later, not least in the final work in the programme, Beethoven’s witty and charming Serenade Opus 25.

This gem, originally written for flute, violin and viola, had been adapted expertly by the ensemble’s flautist, Daniel Pailthorpe, for flute, oboe, bassoon and cello. It was being given its premiere UK performance here and was very well received; justly so.

The unusual instrumentation added colour, which brought out intricacies of the work that are not so obvious in its original version.

Crisp, light playing from the two bass instruments kept the impetus going and added more than a touch of humour as the players clearly enjoyed every moment of the performance themselves.

Sandwiched between the Bach suite and Beethoven’s serenade were four diverse and intriguing works for unusual combinations of players.

Villa-Lobos’s Bachianas brasilieras No 6 for flute and bassoon, played by Daniel Pailthorpe and Amy Harman, was inspired by the music of JS Bach.

The work is technically very challenging, but at no time did the difficulties of performance impact on its consistent and authoritative interpretation which was both lyrical and exciting. Villa-Lobos would have approved. So would Bach.

Beethoven’s Variations in C Major on a Theme from Mozart’s Don Giovanni was originally written for two oboes and cor anglais.

It was performed here in a transcription for flute, oboe and bassoon which, although this combination added variations in tone and colour, resulted in the wooden flute in its low register being pitched against the stronger oboe. This inevitably presented occasional difficulties of balance between the instruments. Maybe a case of “Beethoven knows best”.

Ginastera’s sparkling Duo for Flute and Oboe was played by the husband and wife team of Daniel and Emily Pailthorpe. This is an engaging work, brilliantly performed, that ended all too soon. The audience clearly loved it and called the players back for more applause.

Mozart’s Sonata for Bassoon and Cello in Bb K292 is an oddity. The bassoon part is substantial while the cello is largely relegated to what seems like a second bassoon role. If the cello part was fleshed out and given to an orchestra to play, the work could pass for a bassoon concerto!

Amy Harman gave a warm and convincing account of the bassoon part, being sympathetically partnered by Thomas Carroll.

This concert was unusual in its content. It was very well received by its audience. More like it, please.