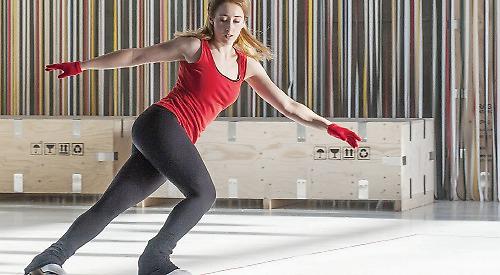 SET in a small seaside town on the Spanish Costa Brava in the Nineties, The Skating Rink tells the story of Enric, a civil servant besotted by a young, penniless, would-be Olympic skater, Nuria, who has no skating rink on which to perfect her skills.

So Enric builds one for her secretly at the Palacio Benvingut, a rambling deserted villa outside the town, deviously diverting public funds to do so. Unfortunately a trespasser discovers a murdered woman on the ice and Enrico’s secret is out.

This drama, in three acts plus a coda, was commissioned by Garsington Opera and composed by David Sawer with a libretto from Rory Mullarkey. It is based on the 1993 novel of the same name by the Chilean author Roberto Bolaño and adopts his strategy of telling the story retrospectively as narrated by the people involved.

The minimalist stage set, realised by the director and designer Stewart Laing, morphs ingeniously from being an office, to become the Stella Maris campsite or the skating rink at the deserted palace without any breaks in the action.

The whole set is built on a plastic “ice rink” on which Nuria, skated beautifully by Alice Poggio and sung passionately by her look-alike Lauren Zolezzi, entrances Enric with her skill and beauty.

The music is colourful, very supportive of the text and uses different scoring and compositional styles for each of the three acts. Shades of Aaron Copland, karaoke, dance music, a charango (South American stringed instrument) and a marching band are all used to good effect.

The first two acts are episodic, telling the story piecemeal from the points of view of Remo, the campsite owner, Gaspar, the nightwatchman, Rookie, a drifter and sometime lover of Carmen, a former opera singer who becomes the murder victim.

Finally there is Caridad, Carmen’s dead-eyed young companion who is also the subject of Gaspar’s amorous inclinations.

The action is fast and the recollections of the witnesses are somewhat confusing, but it all comes together in the third act when the whole sad story is revealed through the eyes of Enric as he serves two years in prison for embezzling state funds. This act is particularly cohesive, riveting and not without pathos as the portly and downcast Enric, superbly sung at short notice by Grant Doyle, compares his sagging personal attributes with those of the slim young woman he adores.

A short coda appended to the third act reveals the name of the murderer — but this is of little relevance as the crime was essentially the author’s ploy to reveal the goings-on at Benvingut.

The opera is ideally cast and the quality of the singing is excellent. Delicious touches of humour are added by Louise Winter who, as the strutting, strident mayor gets her deserved come-uppance. Susan Bickley, much applauded, is utterly convincing as Carmen, the dishevelled, alcohol-soaked bag lady. And Steven Beard risks his own professional reputation as the karaoke singer with limitations.

What this thoroughly engaging and unusual tale is all about is love, poverty and political chicanery. In both its book and operatic forms it is well worth a visit. You don’t need to bring your skates.