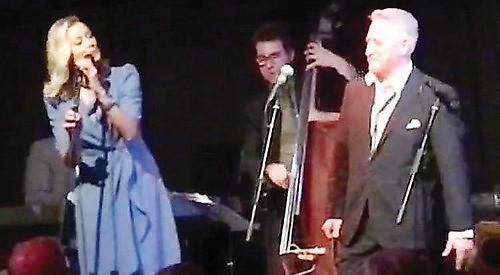 REBECCA POOLE (aka Purdy) set the good times rolling again when she opened a new season of jazz-flavoured entertainment at Purdy’s Pop-Up-Jazz Club in the atmospheric surroundings of the HAODS Studio in New Street, Henley on Saturday 6 October.

And who better to get things off to a great start than Mr. Ray Gelato, a gentleman dubbed the ‘godfather of swing’ who has entertained audiences across the globe with the irresistible pulse of his music and who counts Her Majesty Queen Elizabeth and Knights of the Realm Sir Paul McCartney and Sir Van Morrison amongst his most ardent admirers.

Ray is the complete entertainment package. A razor-sharp dresser, witty and fast-talking, he has a smoldering vocal style of great appeal. Above all he is a consummate musician and one of the best tenor saxophonists you are likely to find.

From the moment he counted the band in for Louis Jordan’s timeless classic ‘Five Guys Named Moe’, ‘the pots were on’ and the musical temperature never dropped below boiling point for the remainder of the evening. ‘I’m Gonna Sit Right Down and Write Myself A Letter’ shuffled along in the slightly more relaxed style of Louis Prima, another great influence on Ray Gelato’s music.

‘Smooth Sailing’, the first of four tributes to Gelato’s saxophone heroes, was a hit for earthy Texas tenor-sax-man Arnett Cobb in 1959 and with the help of Gunther Kurmayr’s economic piano and the walking bass of Manuel Alvarez, this arrangement had a lovely Count Basie feel to it.

Vocals to the fore, Gelato conjured images of the glitz and glamour of Las Vegas with ‘That Old Black Magic’ and ‘The Best Things in Life Are Free’, before cutting loose on an outing of ‘Sweet Georgia Brown’, propelled by the powerhouse drums and sparkling cymbals of Luke Thomas; a young musician making his debut with the band (though he played with such confidence that one could be forgiven for thinking that he had played with the band all his life).

Ray Gelato and trombonist Dave Keech on the other hand truly are long-standing partners in crime as became clear in their improvised lyrics to ‘Saturday Night Fish Fry’.

Then came the moment we had all been waiting for; the moment Rebecca took to the stage and joined vocal forces with Ray Gelato.

And what better number to close the first set than Irving Berlin’s enduring favourite ‘(I Wonder Why) You’re Just in Love’, a fun-filled dual tour-de-force every bit as amazing as the original hit for Ethel Merman and Donald O’Connor.

‘Cottontail’ opened the second set with Gelato roaring in the breathy fashion of Ben Webster, aided and abetted by trombone virtuoso Dave Keech and his glorious use of a plunger mute.

In complete contrast ‘My Last Meatball’ recounted the cautionary tale of a visit to an Italian restaurant.

‘My Blue Heaven’ paid affectionate tribute to the legendary Fats Domino and a chance meeting with the great man in a French bar. ‘He spent the whole time complaining about his band,’ Ray recalled.

Coleman Hawkins’ 1939 recording of ‘Body and Soul’ inspired a generation of tenor saxophonists and Ray Gelato captured the spirit and gorgeous full-toned sound of the original in his ravishing interpretation of this immortal jazz standard.

Rapturous applause welcomed Rebecca back to the stage for a Keely Smith/Louis Prima-style double-hander on ‘I Can’t Give You Anything But Love’. Her rasping ‘Oh yeah’ impersonation of Louis Armstrong left the band in stitches of laughter.

‘’Caldonia’ brought more vocal high-jinks, this time from Mssrs Gelato and Keech. As if to catch his breathe Ray called for a request from the audience, which resulted in an absolutely sublime ‘Isafhan’. Once a feature for Johnny Hodges in Duke Ellington’s ‘Far East Suite’, this impromptu solo performance proved to be an unexpected highlight of the evening.

The band quickly moved through the gears to bring the gig towards a rip-roaring close with ‘Should I?’. By the time it segued smoothly into ‘I’ll be Glad When You’re Dead You Rascal You’ Ray Gelato and Dave Keech were leading a dancing parade around the auditorium with the crowd clamouring for an encore. Ray duly obliged with a rocking blues to round off a fantastic evening.

Ray Gelato will soon be leading his band on a tour of Italy, followed by a pre-Christmas season at Ronnie Scott’s in London.

Meanwhile, Purdy’s next guest at the Pop-Up-Jazz-Club on Saturday, November 3, will be the magical multi-award-winning Liane Carol. Be warned, tickets are already selling at a fast rate, so be sure of yours by visiting www.purdymusic.co.uk.