Young musicians’ confidence shines through on the night 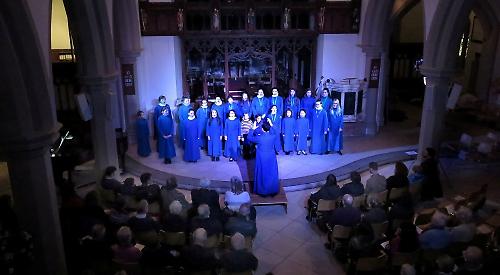 IT says a lot about concert pianist Anita D’Attellis’s passion and commitment to music education that she included an evening focusing on young talent as part of her “Winter Recitals” series on Saturday.

In this second of her 2019 series at St Mary-le-More, Wallingford, D’Attellis was joined by some outstanding instrumentalists and the All Saints Marlow Choristers.

Twenty-two members of the All Saints Girls’ Choir aged eight to 18 opened the concert with their music director Martin Seymour and accompanist Rhidian Jones.

They gave a confident performance of music both sacred and secular, including Panis Angelicus by Cesar Franck, For the Beauty of the Earth by John Rutter, and Londonderry Air, arranged by David Illif.

Congratulations to them that most was sung from memory and with smiling faces. The girls were clearly enjoying themselves and this was much appreciated by the audience.

Conor Maguire gave a lyrical performance of Salut d’Amour by Elgar on the euphonium. We enjoyed this familiar melody, the soloist making a warm tone on the instrument and projecting his sound well — especially in the higher register.

Violinist Benedict Bradley began his programme with the Largo from Bach’s Unaccompanied Sonata No 3 for violin. This was followed by a rousing Sonata Movement (Brahms), the more gentle Lullaby from Suite no 3 in C major (Britten) and then, with great panache, the virtuosic Havanaise (Saint-Saëns).

Overall, this was an engaging and musical performance which showed great maturity for his years.

The second half of the concert introduced promising cornet player Patrick Sharman. He announced his programme himself and had some interesting things to say about both pieces.

We had some excellent and secure playing in the Hummel Trumpet Concerto (second movement) played on Eb cornet. This was swapped for Bb cornet for an energetic Konzert Etude (Alexander Goedicke), which made the very best of the rhythmic interplay between the cornet and the piano.

The All Saints Marlow Choristers concluded the evening with three spirituals — Steal Away and Joshua, arranged by David Illif, and Feelin’ Good by Craig Tyson and Leonard Scott.

There are two more recitals to come in this series, the next one of which — “From Bach to Gershwin” — features the talents of Shiplake saxophonist Huw Wiggin.

For more information and to book, visit www.anitapiano.com