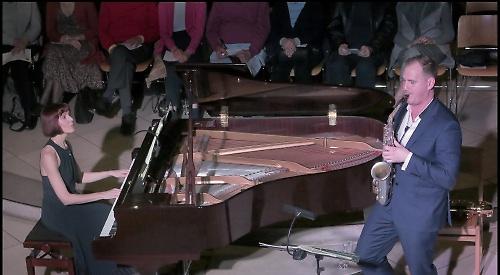 IT’S a real pleasure to see Winter Recitals back for a second season.

Curated by Henley-based concert pianist Anita D’Attelis, chamber music performances take place in the round at the church of St Mary-le-More, Wallingford.

Joining her in this third concert for a musical journey across Europe, Russia and America was saxophonist Huw Wiggin.

Having known both artists for many years, it was marvellous to see them performing together for the first time.

Huw grew up in Shiplake and is now one of the most popular saxophonists of his generation. He is professor of saxophone at the Royal Academy of Music in London and performs all over the world.

For this concert, we began in Italy with the Carneval de Venice by French composer Demersseman. The fingerwork in the Variations was mesmerising and, as Huw put it, “so much fun to play — for once, the piano played fewer notes than the saxophone!”

Two works by George Gershwin formed the centrepiece of the recital. The Three Preludes, arranged by Margarita Shepeshnikova, and the ever popular Rhapsody in Blue, arranged by Nagano for piano and soprano, alto and tenor saxophones.

Though we missed the thicker textures of the original orchestral score, the saxophone captured the essence of jazz — Huw effortlessly managing the transition between the instruments and both players swaying to the beat, fingers flying.

Then it was off to Russia for Glazunov’s Chant du Ménestrel. Originally for cello and piano, it had been arranged for saxophone by Huw himself, who explained that he had once played and still loves the cello. Here we had some startling breath control ending in a long held high note that faded to nothing — magical!

Twice in the concert, Huw had a rest while Anita performed works for solo piano — Rachmaninov’s Elegie, Op 3, No 1 and the Liszt Etude No 3 in Db major with its athletic hand crossings. You would not have known the technical challenges of both works listening to Anita’s musical and apparently effortless performance.

For me, the highlight of the evening was the JS Bach Sonata in G minor as arranged by John Harle. The soprano saxophone’s distinct clarity of sound was well suited to this music. It was sensitively played by the duo, particularly in the Adagio, where every note was cherished.

The programme finished in Spain with Iturralde’s high octane dance, the Pequena Czarda.

“A stupendous performance,” I heard someone say as the audience was leaving, and “There was a real sparkle about how they played together — such a great duo.” I couldn’t have agreed more.

Huw Wiggin’s next local concert appearance is on Saturday, July 13, when he takes to the Henley Festival’s floating stage with the Henley Symphony Orchestra.

The final recital in this series takes place on Saturday, March 9 at 7.30pm with “Vive la France!” — a programme of French music for piano trio. To book tickets, visit www.anitapiano.com