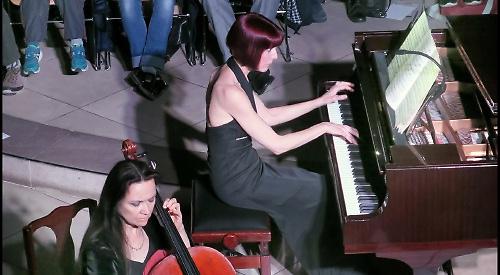 THE Winter Recitals at Wallingford, reviewed weekly by the Henley Standard, have been a triumph.

Pianist Anita D’Attellis, a talented concert pianist, has curated the series and performed in them all.

She has devised a string of musical jewels, each one sparkling in a different way in terms of music played and the other musicians she has chosen to play with her.

The last concert, which showcased French composers of the late 19th and early 20th centuries, was no exception.

Jacqueline Johnson (cello) and Giles Wade (violin) brought equal measures of enviable expertise and sensitivity in their playing and interpretations of the music.

The in-the-round layout of the venue allows the audience to observe the music in an intimate atmosphere and I loved seeing how each of the players, by a quick glance, a hand movement, created great rapport and perfect partnership. This concert was a masterclass in collaboration. The programme started with Saint-Saëns’ Sonata No 1 in C minor, originally written for violin and orchestra, played here by cello and piano. This is classically lyrical, romantic music of the time.

Jacqueline’s cello playing and Anita’s piano seemed to be talking with each other, picking up the melody from one another and contrasting waves of piano runs, sustained trills and staccato passages laid against deep sonorous legato cello passages.

Chausson, a rather quiet and unassuming composer but with a very interesting bunch of friends, lived a tragically short life. He died a week after the first London performance of Poème Op 25 for violin and piano which followed.

This started slowly with piano, then Giles Wade joined with his achingly beautiful violin-playing. The emotion slowly developed with increased tempo, gradual introduction of discord and finished with glorious sustained violin notes. The final piece before the interval, Ravel’s Sonata for violin and cello was, as the cellist warned, “not Bolero.”

This was passionate, rapid, at times mightily discordant, with wild pizzacati and rhythmic verve. It was one of the earliest post-war compositions, perhaps reflecting the changing times. It was so exciting, a journey without map, compass or satnav.

A couple of members of the audience asked me how I intended to review it. What can I say? It was a piece that probably divided the audience, although surely all were left gasping at the sheer brilliance of the playing. It was a virtuoso performance by both musicians. Amazing.

Debussy (a piano solo) and the trio playing Fauré comprised the second half.

Three of Debussy’s lovely piano pieces, Préludes (from book one) provided a contrast to Ravel. They were inspired by a Boudelaire poem and JM Barrie’s Peter Pan.

Now the audience could settle back to the more familiar, tuneful style, where we have more idea where the music is taking us and some familiarity.

These were played with Anita’s exceptional sensitivity and ability to build small contrasts so beautifully.

Finally, all three musicians played Fauré’s Trio in D minor. Although, or perhaps because this is one of Fauré’s late compositions, it is life-affirming music.

In the opening Allegro, the tension builds over long spans of cascading notes, restless, searching but overall melodious.

The Andantino is slow and lyrical, with all three instruments taking turns leading and responding, while the final Allegro resolves its strident passion and harmony prevails.

And then an extra treat: the trio played Massenet’s Thais Meditation, which D’Attellis had arranged for piano, cello and violin. Exquisite.

What a wonderful concert. Henley is indeed fortunate in having access to such a great music. We all thank Anita for sharing her brilliant piano-playing and curating such wonderful concerts.