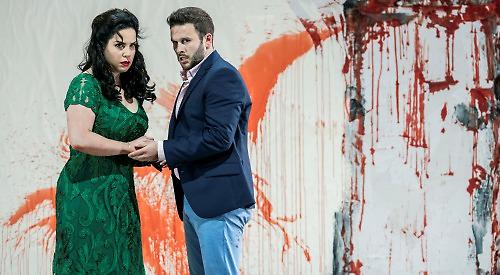 IT is always a thrill to visit Garsington Opera; the beautiful setting, the unique glass theatre providing varied intensities of colour and shade on stage, the friendly and relaxed ambience — not to mention the outstanding level of musical performance.

It all makes a great experience for both the newcomer and serious opera lover alike.

This year they have combined creative forces again, resulting in a lively and refreshing take on that staple of the operatic repertoire, Mozart’s Don Giovanni.

Mozart listed his work as an “opera buffa” or comic opera, yet it includes a kaleidoscope of music and mood within it, embracing melodrama and supernatural elements alongside the comedy.

The opera revolves around the appalling trickeries of the central character, the libertine and serial seducer Don Giovanni, who finally gets his comeuppance by descending into Hell.

The other principal characters react to his activities with a mixture of fascination and revulsion.

Designer Tom Piper’s stage is an open artists’ workshop with large contemporary paint-splashed canvases juxtaposed alongside old masters’ rustic landscapes, all sliding and shifting around to accommodate the scene changes. Piper’s colourful modern dress provides a particular clarity for identifying all the characters and their
goings-on; useful for those new to the story.

The dramatic tone is set right from the start as Don Giovanni (Jonathan McGovern) hurls two large pots of paint at a blank canvas, in exact co-ordination with the two loud D minor chords played at the beginning of the overture.

He and Leporello (David Ireland) worked well together as a pair, bounding energetically around the stage.

Whilst fitting for his manservant, this undignified behaviour was less plausible in the Don.

However, his singing was suavely charismatic and in the “Canzonetta” was suitably seductive as he serenaded the maid, all the while accompanied by Forbes Henderson’s fine mandolin playing.

Meanwhile, Leporello expertly punched his bass voice through one of Mozart’s most famous and popular songs, the “Catalogue Aria”.

Sky Ingram made a vigorous and engaging Donna Elvira, her vocal and dramatic amplitude expressing the full range of her desperation and frustration with Don Giovanni’s behaviour.

Paul Whelan as the Commendatore beckoned Don Giovanni to Hell with well-sustained and darkly grave singing, as trombones and timpani brought the opera to a terrifying close.

The Garsington Opera Orchestra played superbly, with Douglas Boyd as conductor providing finesse and a fantastic attention to detail from beginning to end that would be difficult to match anywhere else.