Three to tango as recitals make a welcome return 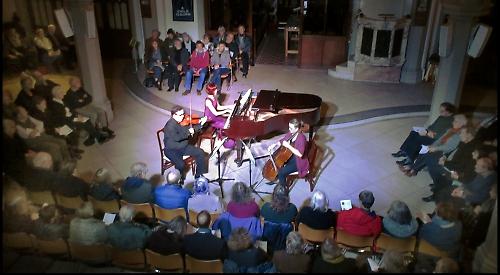 IN the face of strong competition from the local seasonal pantomime, the Winter Recitals Wallingford series of classical music chamber concerts began its 2020 season with a piano trio playing to a full house.

The church of St Mary-le-More is an ideal setting for chamber music. It is large enough to sustain sound well but, thankfully, with no echo. Peter Davis’s crystal clear passagework at the top of the range was equally matched by Bryony Moody’s rich and reverberant cello tones at the bottom end.

And there was no hiding place for the magnificent new piano that Anita D’Attellis played with deceptive ease. Every note was audible and beautifully placed.

The intimacy of the occasion was enhanced by having the players positioned in the middle of the church surrounded closely on all four sides by the audience.

Frank Bridge’s Four Miniatures for Piano Trio consisted of Romance, Intermezzo, Valse Russe and Hornpipe from the nine pieces that the youthful composer wrote for this combination.

These are not musical gems of any great consequence but are well crafted and pleasant enough to merit an occasional airing. The ensemble made the most of them as well-played warm-up pieces — hors d’oeuvre — easy listening but hardly memorable.

The players excelled with a thoroughly researched and consistent interpretation of the work from the first note to the last. Instrumental virtuosity, which was called for throughout, was never allowed to impose upon the underlying flow of the music’s interpretation or to detract from its passionate nature. This was chamber music at its very best.

A long interval followed, allowing the audience time to descend from the heights of rapture and come back to Planet Earth. Wine was available to assist in this process.

The Four Seasons of Buenos Aires, composed by Astor Piazzolla in the Sixties, is loosely based on the concept of Vivaldi’s Four Seasons. In Piazzolla’s work the idea is used to examine ways the complex rhythms of the tango can be used to portray different moods.

It is often claimed that the Viennese Waltz can only be played properly by Austrians because the rhythm of it is in their blood. Is the tango similarly the preserve of the Argentinians?

Thankfully not! Our players entertained us royally with the Tango’s extensive possibilities. They were alive to every nuance and seemed totally at ease with this dance form’s complexity. The link to Vivaldi’s seasons may be somewhat contrived but the variety of moods as demonstrated so ably in the hands of the performers at this concert was in no doubt.

This concert was the first in a series of four recitals. The second, on Saturday, February 8, at the same venue, is a Beethoven triple bill played by Anita D’Attellis. Don’t miss it!