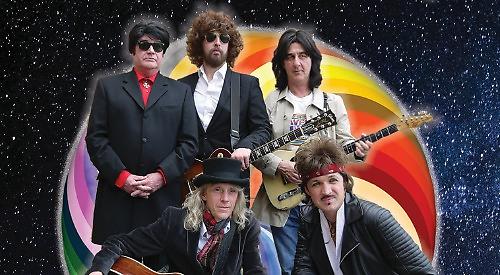 A TRIBUTE to the late-Eighties supergroup co-founded by the former Beatle and long-time Henley resident George Harrison is set to light up the Kenton Theatre next Saturday night (February 8).

In true rock’n’roll style, Paul Hopkins’s Roy Orbison & The Traveling Wilburys Experience are preparing to raise the roof at the New Street venue.

A passion project for all concerned, the original Traveling Wilburys formed back in 1988 when Harrison enlisted pals Jeff Lynne, Tom Petty, Bob Dylan and Roy Orbison to help him record a
B-side for his latest single.

When the resulting track, Handle with Care, was deemed too good for such a limited release, the group agreed to record a full album.

Titled Traveling Wilburys Vol 1, the LP was released in October 1988, just six months after the five members had first played together.

A critical and commercial success, it helped revitalise the careers of Dylan, Orbison and Petty and was followed by a second album released in October 1990.

With Orbison having died of a heart attack less than two months after the release of the first album, the second was dedicated to his memory — albeit in the guise of his band alter ego, Lefty Wilbury.

Three decades on, Orbison’s life and music continues to be widely celebrated.

Paul Hopkins, the founder of the Traveling Wilburys Experience, got his big break paying tribute to the man known as “the Caruso of Rock” and “the Big O”.

He said: “In the late Nineties I was playing in a covers band on board a ship. One of the passengers took me aside and said, ‘Do you know, you sound just like Roy Orbison. Please learn a couple of his songs for me before we disembark.’ So we did, the audience loved it, and a new career was born.

“I then went on to perform as Roy Orbison, first as a solo artist and later with my own band. We appeared at theatres and festivals all over the UK and abroad for many years.” With that track record, how did Paul come to embark on his Traveling Wilburys adventure?

“A question sometimes asked by audience members was, ‘Why don’t you play any Traveling Wilburys?’ he laughs. “The reason of course is that the Wilburys had five lead singers, all with very different voices, and Roy was only one of them.

“So with that in mind, our show manager Jayne Connor and I decided to search for the best George Harrison, Tom Petty, Jeff Lynne and Bob Dylan performers we could find and see if we could recreate the magic of the Traveling Wilburys. Now in our sixth year of touring, here we are.”

The band members play in an easy, relaxed style, with great respect for each other’s talents — much like the original Wilburys.

While the original band never played live, they often talked about what form a Traveling Wilburys show would take.

In 1991, Harrison told an interviewer: “I’ve always played around in my own mind with what a Wilburys tour could be. Would each person do a solo set and then do Wilburys at the end, or would we all go right on from the beginning to end and make everything Wilburys? It’s an intriguing thought. We could have a great band up there and the four of us could play acoustic if we wanted to. We could all sing Blowin’ in the Wind and Bob could sing Something. Or we could just sing our individual songs and make them Wilbury tunes, as if we’d recorded them that way. Whatever it was, we could do it.”

In paying tribute, Paul and his colleagues have opted to play both Traveling Wilburys numbers and hits from the back catalogues of the individual band members.

Songs the audience can expect to hear on the night include Handle with Care, End of the Line, Wilbury Twist, Heading for the Light, Tweeter and the Monkey Man and Last Night, together with Dylan’s Blowin’ in the Wind and Mighty Quinn, Harrison’s Here Comes the Sun, Lynne’s Mr Blue Sky and Petty’s Runnin’ Down a Dream.

Given Harrison’s links to Henley, are the band looking forward to playing in his backyard, so to speak?

“This will be our second appearance at the lovely Kenton Theatre and this time I hope to have the time to take a peek at Friar Park,” says Paul.

“I’ve seen it featured in so many documentaries and heard it mentioned in many stories. That would be a real treat.”

The show, which starts at 7.30pm, has a running time of 140 minutes, including a 20-minute interval.

Tickets are £25.50, including a £1 theatre restoration levy.

For more information and to book, call the Kenton Theatre box office on (01491) 575698 or visit www.kentontheatre.co.uk