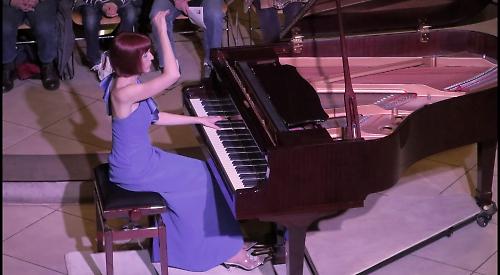 Pianist Anita D’Attellis founded these annual recitals in 2018 and was the soloist for the evening.

In her Beethoven Triple Bill she performed three of Beethoven’s piano sonatas, each one representing a different period of the composer’s creative output.

The venue was ideally suited to the intimacy of a solo recital; the audience was seated “in the round” so to speak, with the piano being in the centre and the fine acoustics in the church enhanced by its high vaulted ceiling.

After Haydn and Mozart, whose sonatas were intended to be played in the salons of the aristocracy, Beethoven’s 32 piano sonatas were the first cycle of major piano pieces suited to concert hall performance and are recognised to be one of the most important collections in the history of music.

They provide a vivid commentary on the composer’s life and allow us to see a great and tragic personality reacting to circumstances around him, including the despair of his increasing deafness.

Anita began with Sonata Pathetique in C minor Op 13, composed in 1798 when Beethoven was just 27.

The striking solemnity of the opening chords grabbed the audience’s attention immediately, plunging us into Beethoven’s troubled world. The following Allegro passage with its incessant bass tremolo octaves was carefully controlled, the dynamics rising and falling in sympathy with the turbulent journey through an assortment of keys and shifts in mood.

The Adagio Cantabile, played very slowly and perhaps overly measured at times, nonetheless projected a strong melodic line with good balance between the parts. The Rondo, a mix of pathos and humour, flowed well with its musically shaped phrases and crisply clean runs.

The Waldstein Sonata Op 53, composed just five years later in 1803 during Beethoven’s “middle” period, is on a whole new scale and recognised to be one of his greatest and most challenging sonatas.

It demands virtuosic techniques such as a simultaneous pedal trill, high melody and rapid left hand runs, as well as many glissandi.

Anita took these challenges in her stride with great energy, demonstrating not just a powerful technique but her musical insight; the profound harmonies of the short middle section brought a sense of stillness and space between the thunderous complexity of the outer movements.

The final work, Sonata in E major Op 109, composed in 1809, was a return to Beethoven’s smaller, more intimate style, with the focus on the third movement’s theme and variations.

Anita brought out the special lyricism of the simple “theme” beautifully, all the while highlighting exquisite melodic and harmonic shifts, ornaments and embellishments which suggest the romanticism of later composers.

It was particularly fitting to hear these sonatas at the beginning of this significant year, the 250th anniversary of Beethoven’s birth.

While we may hear plenty more performances of his music in the coming months, for the lucky members of last week’s audience this will surely be one of the most memorable.