Strolling through vibrant riverside pasture feels like heaven on earth 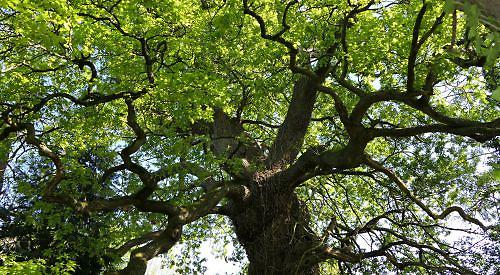 THE section of the Thames Path that runs from Shiplake to Henley is a joy to walk at the moment, especially early in the morning when no one else is about.

Passing underneath Shiplake railway viaduct from Mill Lane, we walk past a line of plane trees and meet the Thames.

The riverbank is steep, cliff-like. A female mallard duck shepherds her troop of gorgeous little fluffy ducklings. They are cute, snapping their little beaks as they try to snatch flies. I want to take one home. Rosemary reins me in. Funnily enough, the little things will “imprint” on a human if adopted when orphaned.

The river bends north, a boatyard on the far bank and Wargrave Manor uphill and beyond.

Yellow water-lilies (Nuphar lutea) decorate the slack water. They will be in flower in June. Rigid hornwort (Ceratophyllum demersum) is also present under the shimmery ripples. Daisies and meadow buttercups shine in the sunlight right up to the river’s edge.

As we approach Lashbrook, I’m delighted to hear the brief, strident song of a whitethroat (Sylvia communis), the same species that I’d heard a week before in a sunlit patch of semi-open woodland. The bird is singing from the interior of a small hawthorn bush at the side of a tinkling brook. The distinctive rattling of a grasshopper warbler (Locustella naevia) sounds deep down in the riverside vegetation. I can see it through my binoculars, so no mistake.

Elsewhere the distinctive notes of reed warblers (Acrocephalus scirpaceus) resonate with their harsh but distinctive chirring. For a “birder” this is pretty good. I don’t get overly excited as I love all nature and try to understand the relationships between animals, plants, fungi, water, soil, weather and geology.

We have to divert from the river for a short while and pass Shiplake station and on past Bolney Court.

A colossus of an oak stands here, one of the biggest that I have ever seen. It is magnificent and must be well over 600 years old, possibly a lot more. One thing that I admire about old oaks is their perennial vigour. They appear to be unstoppable and somewhat aloof.

As we emerge from the confines of other old and handsome trees, field maples, buckthorn and ash, we enter a meadow. The vista is superb. Across the river we can see where the Hennerton Backwater re-joins the main flow from its meandering. A classic floodplain arrangement.

As we stroll through this riverside pasture, it feels like heaven on earth. The once claggy path is dry, crystalline, cracked like the bark of an old oak, resembling a mini Giant’s Causeway.

The dominant grass is meadow foxtail (Alopecurus pratensis), displaying its purply spikelets that sway balletically in the wind.

We spot a pair of mandarin ducks (Aix galericulata). The flamboyant male struts his stuff but his mate looks unimpressed and takes a doze in the sunshine. So much for male preening.

A pair of tufted ducks (Aythya fuligula) rest on a fallen tree that has wedged itself into the riverbank. All of a sudden the drake raises his neck and looks worried. I follow the direction of his gaze and spot what looks like an otter on the rampage. It isn’t, but a female mallard. Head down, she still steams ahead with no time to spare, trying to escape from a sinister predator. I wonder what the demon pursuer was.

House martins (Delichon urbica) have arrived from their peregrinations and a swallow (Hirundo rustica) skims the river. A great crested grebe (Podiceps cristatus) takes a dive, a coot pootles along. The water is “gin-clear” but we see no fish or fry. A friend has noted the same. Otherwise the river looks to be in good health.

As we stand admiring the view over to the Berkshire bank, I spy a bird in my peripheral vision that I seem to remember from a while back. It looks like a huge swift.

Using my binoculars, I can see there are three of them, maybe four — hobbies (Falco Subbuteo). What a pleasure to witness them darting about with their slim tails and scimitar-like wings. They are quartering the steep far bank and feeding off mayflies (Ephemeroptera) that have drifted into the air in their thousands.

The birds are having a field day consuming the insects on the wing. So agile and fast are these birds that they are even able to snatch a swift, dragonfly or bat from the air. Incredible. It is hard to wrench ourselves away. We could watch them all day.

Lower down and just above the water, two common terns (Sterna hirundo) mimic the hobbies’ flight plan and they too seem to be reaping the ephemeral harvest.

An adult male mute swan or cob takes umbrage as he sees two cygnets impinging on his territory. Head back and wings arranged ostrich-fashion, he charges towards the pair. They move downriver. Herring gulls fly along lazily but they are always on the lookout to snatch any available morsel. Black-headed gulls pursue their noisy business as they chatter in flight.

Egyptian geese (Alopochen aegyptiaca) look serious as they guard their little ones. Rosemary has to stop me once more in another kidnap attempt.

At Marsh Lock a grey heron (Ardea cinerea) is stationed inside the interior of the southern lock gate, patiently looking out for fish. He looks like a bewildered old professor. Further on a cormorant (Phalacrocorax carbo) is stood on a yellow buoy, bobbing about with nonchalance as he inspects his wings.

Halfway across Marsh Lock we have a brief chat with a couple gazing at another bird. It is a male sparrowhawk (Accipiter nisus) who’s putting on a fine aerobatic display.

Perched in a far treetop, a male kestrel (Falco tinnunculus) surveys his world. Grey wagtails (Motacilla cinerea) flit about. A pair of mute swans guards six cygnets below the parapet. Rosemary is now looking in her bag for handcuffs.

Just before we leave the wooden walkway and descend into Mill Lane, a brightly coloured kingfisher (Alcedo atthis) shoots past, iridescent, under the woodwork. Halcyon days.