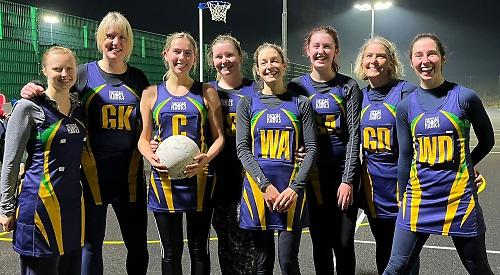 HENLEY HAWKS 2nds got their second half of their Maidenhead League Division 4 campaign off to a winning start as they defeated Dean Dreamers 29-11.

From the first whistle the Hawks were intercepting the ball and moving it swiftly down the court. Lauren Maddock (GS) scored at almost every opportunity presented to her with Belle Tebutt (GA) picking up rebounds ensuring the Hawks were leading 9-2 at the end of the first quarter.

The momentum continued with Nikki Stubbs (WA) and Sarah Filby (WD) working fast and hard down the wings to keep the ball moving rapidly up to the shooters. The Hawks continued to impress in the scoring circle as they led 16-7 at half-time. Sophie Surman (C) controlled the game throughout and kept up the pressure in the second half making numerous interceptions which led to good creative play. The Hawks were relentless in attack and furthered their lead by another 12 goals in the third quarter to lead 28-10.

Henley kept battling through the fourth quarter with the determined defence of Sarah Kenyon (GK) and Juliet Machan (GD) holding strong and forcing errors for the opposition as they ran out winners by 16 goals.