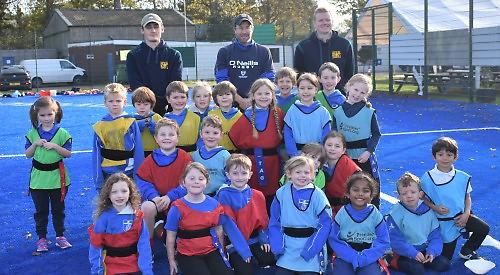 About 100 pupils from Nettlebed Primary School and Shiplake Primary School received the two hours’ tuition on the artificial pitch at the club’s Dry Leas ground.

Coaches from Performance Sports of Reading led the annual training programme as part of a partnership with the club.

The children, from years one to three, started the session with an hour of warming up exercises which focused on teaching them how to catch, pass and work as a team.  They were then split up into groups to take part in smaller coached games of tag rugby, a safer version of the sport in which they “tackle” each other by removing a velcro strip attached to their opponent’s waistbands.

One of the smaller groups referred to themselves as the “Shiplake Hawks” while another called themselves the “Nettlebed Stingers”.

Head coach Chris Ellison said: “It feels absolutely brilliant to be back after a year off. It’s great to have all the children out and about in the sunshine as it’s where they love to be — out with their friends and enjoying the games.

This is important because of the well documented benefits of exercise and activity for their development. It’s not just the physical benefits but the mental benefits of being outside.”

He added: “We’re born to move and be active and rugby gives you a great outlet to do that. You learn to work not only independently but as a team and we’re so fortunate to have this programme working in partnership with the club.

“We can see from the smile on the kids’ faces that they are enjoying it.”