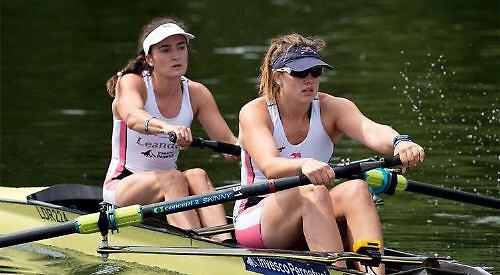 The 23-year-old Leander Club rower hopes to compete in both Tokyo next summer and at the Paris Games in 2024.

And there could be no better place to take a giant stroke towards realising her ambition than at the royal regatta here in Henley as it is her home town.

Harris-White will be in either a Leander eight comprising the GB development squad that will be competing in the Remenham Cup or a Leander pair in the Hambleden Pairs Challenge Cup.

Victory would help her bid to secure a seat in a GB boat for Japan.

Natasha Harris-White grew up in Pearce’s Orchard, off Fair Mile, with her parents Robin Harris, a retired IT project manager, and Janice White and brothers Alex, 21, and Angus, 18.

Her parents encouraged the children to participate in sport from an early age, just as they had done.

Her mother ran marathons and her father played rugby and cricket for Keble College while at Oxford.

While her brothers took up football and golf, young Natasha preferred athletics.

While a pupil at Valley Road Primary School and then Gillotts School, where her mother used to work, she took part in cross-
country runs at Stonor Park. She also joined Reading Athletics Club.

“I used to be really into my athletics,” she says. “Before starting rowing, I used to go for runs along the river every day because I was a middle distance runner.”

This developed her competitive streak, helped by a rivalry that developed with Alex and a school friend who always used to beat her.

Harris-White says: “Then I suddenly beat her. I won this race and thought, ‘wow, I’m good at this’.

“When you are in front, you obviously push yourself harder because you want to stay ahead of everyone.” Her parents were very supportive, realising their daughter was a talented athlete.

Harris-White says: “They were just really encouraging. My mum used to watch the races and would say, ‘if you think you’re running your hardest, you just need to run harder and I was like, ‘mum, it’s not that easy’.

“My dad used to come to the internal cross-countries we used to have at Gillotts and support even when he wasn’t supposed to.

“He used to just stand there alone in the field watching and I would think, ‘what are you doing?’”

It was her mother who encouraged her to try rowing.

Harris-White says: “She was always like, ‘oh you should do it and get into it — you’d get into Leander straight away’ but I just didn’t.

“I’m actually really glad I didn’t because of the amount of injuries you hear about in young people rowing and training too much. I love rowing but I think if I had started younger maybe I wouldn’t love it as much.

“I just love rowing as a whole and don’t think I could stop. I think training and rowing are absolutely addictive.

“I think that’s why when people try to quit they come back. I don’t know why, there’s just something about it. Maybe it is just the pain.

“We all just love training. All of us love it. It comes down to feeling prepared and I just really like that.

“I think it’s the teamwork as well. You’re on the water and when a boat goes really well it’s effortless. You all work together.

“If you all push at the same time you’ll trust that you’ve done the same amount of training and worked so hard together to make the boat go well — it’s just a great feeling to have the boat run well and then win.

“You know that you’ve all worked so hard towards a goal and it just makes you respect each other so much. You go through so much together.”

Harris-White recalls being inspired by the athletes she saw on television competing at the Beijing Olympics in 2008 when she was 12.

She says: “I was sat in my room one day and I just suddenly thought, ‘I want to train for something and go to the Olympics’.

“I remember that exact momentand thinking like, ‘I want to train’. At the time it was high jump, athletics, skiing and all those sports.”

Her focus switched to rowing after she tried it at a summer camp at Upper Thames Rowing Club in 2011 and was converted.

She joined the club and because of her talent and enthusiasm was able to train with the senior men’s and women’s teams, which she says was a privilege.

“You find that so many of the older members are ex-champions,” says Harris-White. “They are just amazing. So many have won medals at world cups or championships.” In the run-up to London 2012, Upper Thames captain Justin Sutherland asked her if she wanted to take part in the nationwide Olympic torch relay, which was due to pass through Henley.

“I was really keen, so they said I could do it,” says Harris-White.

She was part of an eight that rowed with the torch from Leander Club to Mill Meadows and comprised athletes from Leander and Henley Rowing Club plus five-time Olympic champion Sir Steve Redgrave, now chairman of Henley Royal Regatta.

Afterwards she was given a tour of Leander, which made her want to become good enough to represent the club one day.

After Gillotts, Harris-White went to The Henley College and then to Newcastle University to study biology. The university had been recommended because of its strong rowing team.

Harris-White says: “I went up and just absolutely loved it. Newcastle is quite a small city but the architecture is amazing and it just has really cool places and a really good nightlife. I still love it.”

She learned a lot rowing on the River Tyne as it is affected by the tide which meant training sessions were hard.

“I think Newcastle made me very mentally tough,” says Harris-White.

“The sessions we used to do were absolutely mental. They would take hours. You would be on the water for so long and then you’d come in and do another crazy session.

“Then we’d spend another two-and-a-half hours on the rowing machine in the evening after
lectures.”

In her second year she contracted glandular fever, which she believes may have been the result of the gruelling training regime.

Despite her studies and rowing, she still found time to enjoy life.

Harris-White says: “The team used to go out on Sundays after competitions and there would always be people up for going to certain place.

“It was so fun and I just love the city and do miss it a lot.”

She graduated in 2017 and joined Leander as a full-time rower.

Apart from some nannying and babysitting to earn some money, most of her time is spent on the river.

Harris-White says her time at Leander has made her a much more accomplished rower. The results prove this with victories in a Leander eight at the British Rowing Senior Championships in Nottingham in October and the Head of the River Fours in November as well as in the Di Ellis Trophy at the Metropolitan Regatta in Dorney Lake earlier this month.

She was also in a Leander eight and a pair that won at the Ghent Regatta in Belgium last year.

Last month she was part of the GB development eight that won at the Djuisberg regatta in Germany.

This experience has taught her a lot about what she needs to do to improve.

Harris-White explains: “I think I need to be more confident in the boat and more confident coming into racing as well and just having the confidence that I can make it.

“I need to have more confidence that we can beat people and be more sure of myself.

“I definitely wouldn’t be in this position if I was at any other club and I trust the coaches completely to make the right decisions and put me in the best position that I can be.

“It’s seems crazy that two years ago I finished uni. I have been at Leander for two years and have really pushed myself. I think I’ve come on so much.

“I just absolutely love being here and we just have a great group of girls. We all encourage and push each other and they’re fun to race with. Everyone is just so excited for Henley Royal Regatta.”

A strong performance at the regatta would demonstrate to the GB selectors that she deserves a place in the national squad.

“It would be amazing and I feel like I’m really close, really on the edge,” says Harris-White.

“They wouldn’t have even known who I was two years ago, so I think it’s just amazing to have come this far.

“Some mornings I have actually woken up and just thought, ‘why do I get up this early to actually put myself in this much pain?’ but I just love it.

“I love being here. I love the group of girls that I train with, I love the regatta and I love racing. I just love everything about it.

“It is really, really hard work and for the amount of hours that you put into it, it’s crazy that you are doing it for a race of just six, seven or eight minutes.

“I like being good at something. I don’t think I am that much of a perfectionist but I do like to train as I know that it will all add up to me feeling prepared on the day of a competition or whatever race it is.

“ I like to feel prepared and work hard to do well.”