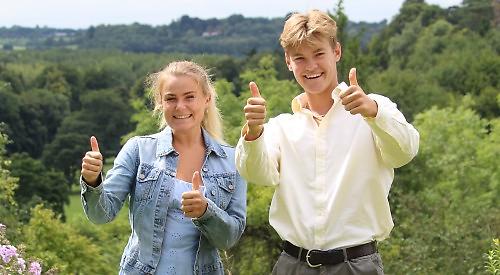 AN undergraduate has launched a tutoring service to help other students whose education was disrupted by the coronavirus
pandemic.

Maddie Clark, from Medmenham, set up TutorMad in May when her A-level exams were cancelled so she had a lot of free time on her hands.

The 18-year-old did not want pupils like her to fall behind during the lockdown due to the lack of interaction with their teachers so she teamed up with a friend, Samuel Nicklin, also 18, from Marlow.

The pair have known each other since they attended Danesfield Primary School in Marlow together.

They recruited 13 tutors made up of high-achieving current and former pupils of Queen Anne’s School in Caversham and Sir William Borlase’s Grammar School in Marlow, the respective schools where the pair recently finished studying for their A-levels.

Now the business has expanded to become a tutoring and mentoring service for academically outstanding students from the Henley area.

However, their ambition is to increase the availability of extra tuition so that children find it easier to stay on top of their learning irrespective of their socio-economic background.

Maddie achieved A* in all her
A-level subjects of economics, history and mathematics at the independent girls’ school and will be going to Durham University to study philosophy, politics and economics in October.

Maddie said: “I’m the sort of person that finds it hard to sit and do nothing. It got to the point where we were on study leave and I put something on Instagram and that is when Sam got in touch.

“He has done tutoring before but we both have very different revision methods. We thought it would be a good idea to put together a structured approach and he created that.

“Before we launched it, we already had all our tutors. They range from year 12 to their third year of university.

“I think having someone who has gone through the same experience recently is really useful. They know what revision works for certain exams and I think it is nice to have a tutor as well as a mentor. Learning is not just about a textbook but also your revision habit.

“With all our tutors being sixth form and university students who have achieved the highest grades in their subjects, pupils will have access to a tutor who recently sat the same exam they are preparing for.

“This way, students will not only have an academically outstanding tutor but a mentor who knows precisely what they are going through and is relatable to teens, something that is extremely important with the stress and uncertainty of re-sits and future exams during the pandemic.”

Maddie lives with her mother, Marie, who works in real estate, and father Carlos, who is a dentist, and younger brother, Theo, 15, who is a pupil at Reading Blue Coat School in Sonning.

She used to work part-time at the Dog & Badger pub in Medmenham but it closed during the lockdown, which meant she had plenty of time to market TutorMad and launch the website.

The biggest challenge in Maddie’s own education was her dyslexia, which was diagnosed when she started at Queen Anne’s.

This meant she was given 25 per cent extra time during exams as she would find it hard to express herself.

She also struggled to find an effective revision technique, which is why she now feels passionate about helping others who are anxious.

Maddie said: “I worked quite hard in my A-level mocks, so I hoped that my grades would be good. I was not expecting as good as I got but I was expecting to get into university.

“It was harder this year with the changes to the system and how the centre assessment grades weren’t used originally. I had to work quite hard and it always took me a long time.

“I found my dyslexia quite frustrating at times. Having someone to guide me through it would have been amazing.

“I wasted a lot of time doing pretty revision cards and found it hard to remember things. All my teachers knew I was dyslexic so they would help with my exams.

“I knew what I wanted to say but I struggled to express myself and I always overwrite. I definitely needed the extra time and I wouldn’t have finished the exams without it.”

TutorMad currently has three clients and classes are delivered online for both A-level and GCSE subjects.

From next month, the founders hope to be able to do face-to-face tutorials once the children have the consent of their parents or guardian.

The options range from a full tutoring package to a “course crammer” which is designed for students who have exams in less than five months’ time.

Lessons cost £20 each but there was a £5 discount during the lockdown to try to make the service accessible to as many students as possible, which is Maddie’s ultimate aim for the business.

She said: “Despite the challenges covid has presented us, there are no limits to our creativity and, if you have a vision or idea, run with it. You never know where it may take you.

“With A-level results causing chaos, it has highlighted how mock exams and assessments throughout the year have never been more important.

“Without having the opportunity to sit an exam, many GCSE students across the country may be re-evaluating sitting their exams in October.

“After months of no school, the thought of sitting exams later this year may seem extremely daunting.

“That is why we are hoping to make our services readily available for all who need it.

“Our services will help take the stress away from working parents who have been home-schooling children since the beginning of the pandemic and relieve them of the pressure of keeping their child educated if schools do have to close again.”

Samuel said: “I saw Maddie’s post on social media where she said she was looking for tutors for her agency and I said I would love to do that with her.

“I have been tutoring for the last year and I started really getting into it because I thought it was just the best possible job for a student to have.

“I have worked at Starbucks and not been paid very much and worked until late.”

He said every student should try tutoring, explaining: “We are more acutely aware of what the students are going though because we have just done the same.

“Professional and older tutors are slightly more direct and to the point. Student teachers are more aware of troubleshooting your areas of weakness.

“Over time, we hope to find some more tutors from other schools in order to cover a bigger area.”

Samuel’s older sister Chloe, 20, who is at Oxford University, reading archaeology and anthropology, is one of TutorMad’s tutors.

Another is Emily Davies, a class mate of Maddie’s at Queen Anne’s, who is planning to study biology, philosophy and politics at Edinburgh University.

Emily, 18, from London, said: “I have done some tutoring before and when Maddie started up her own company she messaged me and asked if I would be involved. I am currently tutoring a girl in geography and history.

“I thought it would be a really good idea because I want to be a teacher one day. I had a tutor when I was doing my GCSEs and it was actually really daunting to have a 40-year-old person teaching me.

“I think having someone that is closer to your own age makes you feel a lot less nervous. I have always loved working with children and I used to be a gymnastics coach.”

Emily was awarded an A* in biology and A grades in chemistry and history. Her grades were originally AAB before centre-assessed grades were used.

She said: “I think it was because my school didn’t get many A*s in previous years for science. It wasn’t a problem for me because I could still go to my university but I know lots of people that were screwed by the system.

“The Government handled it pretty awfully. People seem to think that private schools benefited more but that wasn’t always the case and it was an absolute joke. I have seen so many people crying because of it.”

Tutor Leon Tasch, from Hurley, will be entering year 13 at William Borlase’s Grammar School next month.

He specialises in maths tutoring and hopes to study it at university.

Leon, 17, said: “My biggest challenge was that I was very ambitious with my GCSE subjects. I did three languages and I ended up having too much information to cram in. You can be as clever as you like but it is all about having a good
technique.

“That’s what makes TutorMad so good because we have not forgotten what it was like. I have only taught one person so far and she is in year 8 so she is not focusing on her exams but it is all about laying the foundations.

“I thought online tutoring would be difficult but it went really well and it feels very natural to me now.

“TutorMad is really good at treating everyone as individuals. The school system tends to have a one-size-fits-all approach, whereas this is a lot more personal.”