Teacher passing on love of poetry to pupils with book 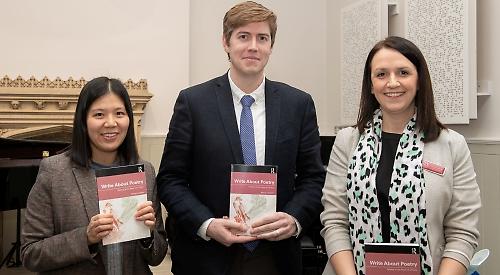 STEVEN JACKSON is a man on a mission, writes Natalie Aldred.

He is passionate about poems — so much so that he wants to help others get into the habit of reading them for pure enjoyment.

His book, Write About Poetry: Getting to the Heart of a Poem, was launched this week and is packed full of tips and tricks on how to get started.

Steven, who is originally from Gravesend in Kent, joined Queen Anne’s School in Caversham as a teacher of English in 2013.

He formed the Deceased Poets Club and found “lots of teen poets” in the ranks.

Despite this, not everyone can be swayed so easily. Steven says: “I mention in the introduction to the book the painful refrain that English teachers are always subject to when we say, ‘This term, we’re going to study poetry’ and there is this collective groan of, ‘Oh no, not poetry’.

“I feel that that’s a disservice to poetry. I felt like I wanted to try to make it an accessible subject to all readers.”

Steven, 38, started off writing his own poetry at school and was inspired by the work of John Keats whom he studied for his English literature A-level.

“That really stimulated me and then I sort of read it for pleasure,” he says.

He graduated from East Anglia University in Norwich in 2005 and studied for a master’s degree at the University of Reading from 2015 to 2017 while teaching full-time.

He says: “It starts with the very simple observational elements of poetry that any reader can make sense of in the first three chapters and I work from how that forms a basis for more complex reading and interpretation later on.

“The final chapters in the book look at how a more experienced reader of poetry can make comparison essay compositions and then compose essays on a group of poems by a single writer.”

Poems are not unlike novels, he says, adding: “When we read novels and things like that there’s a clear character, there’s a plot line, there’s a setting... and we all manage to access novels.”

His own favourites are Keats, Shakespeare and Wordsworth as well as modern writers such as Ted Hughes, Seamus Heaney and Paul Muldoon.

While Steven is both an avid reader and writer of poetry, he has had less time to do this recently as he and his wife, Ami, have a son, Spencer, who is nearly two.

He says: “I was actually finishing the book in the last few days — well, he’d just been born actually — and everything seemed to be happening all at once.”

• Write About Poetry: Getting to the Heart of a Poem is published by Routledge (£32.99).