Wildlife is loving Jubilee River diversion even if locals aren’t 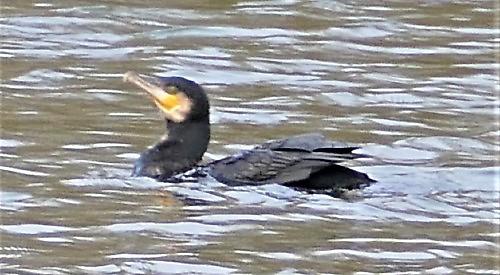 MY friend Rosemary Henderson is driving the two of us east through and past Maidenhead.

As we approach the outskirts of Slough, she takes a turn to the right to enter Marsh Lane.

After passing some attractive cottages, we find a small car park, leave the vehicle and are welcomed by a fierce wind blowing from the east. Boy, does it blow.

We’ve come to take a look at a portion of the Jubilee River that was excavated in the late Nineties and early Noughties to alleviate potential flooding in the Maidenhead and Windsor areas. It is quite wide and deep and there arfe some small adjacent lakes.

Over seven miles long, the river diverts water from just past Boulter’s Lock to return to the main stream of the Thames just downriver from Eton.

The Environment Agency oversaw the plans and construction at huge cost.

As I see things, the agency appears not to have addressed the main problem of potential flooding events.

Far too much housing and too many commercial sites have sprouted up on our essential flood plains without any forethought to the risk of inundation.

I see this excavation as a panic measure. Residents of Bray aren’t too happy either as they fear potential catastrophe as a consequence of the channel’s construction diverting water towards their small community. For many years, mankind has sought to divert, straighten or create new canals to either irrigate land or simply shift a river’s course.

In the latter case it has not and never will work. Over time every river will always find its own way.

On the upside, nature has moved in in great numbers. The sensitive planting of osiers and alders with a gentle slope from a raised, broad path down to the presumably deep trench has resulted in a wonderful amount of reedmace and other marginal plants.

These plants will obviously be welcomed by many early summer arrivals, such as reed and sedge warblers, the former quite secretive when singing, the latter rather noisy and rambling. I’ll have to return in late spring and not forget my binoculars as I suspect that I may spot the odd marsh warbler, a rare bird compared with the previous two.

On this very windy day plenty of resident birds are on the water, more in the air.

The ever-present cormorants and black-headed gulls are abundant, quite typical of a winter’s day near and over water.

Coots, great crested grebes and tufted ducks pootle about as they generally do. A lone pair of mallards drifts downstream.

A heron flaps off just as Rosemary is about to capture it on camera and promptly disappears to skulk within the reeds on the opposite bank. An enormous flock of redwing hurtles above with their “seep seep” calls heading south.

As we watch a pair of walkers stop to point in the birds’ direction. A pair of deer are lurking tight to a hedge at the far side of a field in the far distance. Roe, I think, but they are gone in a trice.

After a ramble downstream, we return to Rosemary’s warm vehicle and head towards Henley.

Somehow we get lost along the way, passing some fine trees, but eventually find ourselves in Pinkneys Green from where we head to Hurley.

What a fine village this s with wonderful old buildings, a fine church, an historic barn, an ancient priory and two pubs. The Olde Bell, which was reputedly founded in 1135 and is described as the oldest inn in the world, looks inviting. The Rising Sun is another to explore. It is the epitome of old England here.

We walk towards the river’s edge along a tight footpath between houses, outbuildings and an old fishpond now more of a classic old marsh. We decide to return soon to take a look at the weir and the riverbanks on either side of this ancient settlement.

We head home with plans for the future. Stopping off at the Flowing Spring at Playhatch, we look forward to the new year and all its promise. We can’t wait.