To the pub and back via glorious hillside and spooky woodland 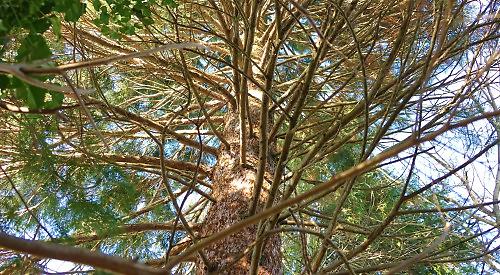 IT’S early morning. I check on the state of my garden. All seems well. I throw out some grain for the birds. A male blackbird drops down from a guelder rose to eat just feet away. Almost immediately a female appears, clucks like a demented harridan and drives him away from his breakfast. Talk about “hen-pecked”!

A robin then proceeds to bully some dunnocks. I’ve provided plenty of food so I don’t understand these birds’ aggressive behaviour.

Later, my friend Rosemary Henderson is driving my mum and me to the Black Horse at Scot’s Common once again (the pub’s bacon baguettes are addictive).

We are a bit too early so I direct Rosemary to Garsons Farm along a potholed lane towards Yewtree Brow that eventually leads to the village of Ipsden.

Beyond the farm this small fraction of the Chilterns world opens up and the view from here is spectacular.

The day is quite clear so it is possible to see beyond Didcot to the Vale of Oxford and the hills beyond. It may be blowing a gale but we don’t care. Fieldfare, carrion crows and red kites perform their fleeting and languid ballet choreographies.

We return to the pub briefly and leave my mum with the staff and regulars while Rosemary and I strike out to the north-east in order to enter a small but rather enchanting woodland.

Inside we find the usual species that form the majority of the local wooded landscape — beech, oak, ash, cherry, holly and yew.

Among these natives we encounter tall Douglas firs and many western hemlock-spruce. It must smell lovely here in summer.

The path that leads to Uxmore Farm is dark and the wind whooshes and whistles through the needles and bare twigs with no avian accompaniment. It would certainly feel forbidding after nightfall even with a good torch.

We emerge in Kit Lane, which runs from Stoke Row to Nuffield, and the wind hits us once more.

We walk towards Stoke Row and then turn right towards Basset Manor, which looks ancient and the perfect location for a ghost story film. A tall, strong hedge at the roadside provides a windbreak as well as obscuring part of the building.

A little further on we find a stile and enter a field containing a flock of grazing sheep. They seem oblivious to the cold wind with their warm fleeces and simply look at us inquisitively as we walk through them.

We then head back to the pub for a half-pint and then home.

The next mornng Rosemary and I meet up again and drive to Mill Lane car park in Henley and walk the short distance to Marsh Lock.

The river is high and flowing furiously. Its power is plain to see. The wind is strong, too, enough to blow a hat off but we’re prepared. At the lock two wagtails run about searching for insects. Their common name is not really fair as they are only grey on top and have lemony-yellow underparts. I love the way they move; they’re never still.

On the way to Shiplake we stop for a moment of contemplation and take in the views of the luxurious properties up and down the river.

Back on the Oxfordshire bank, which is hellishly muddy, we move south towards Lower Shiplake. The bank is full of the remnants of last year’s botanical glory, common reed and purple-loosestrife and so much more, a summer visiting warbler’s paradise. The osiers and alders will help our forthcoming visitors too.

With the mallard and tufted ducks, Canada geese, great-crested grebes, coots and the now ever-present cormorants, black-headed gulls and red kites, it all seems as one would expect on a riverside walk from Henley. A stern-looking heron stands on the Berkshire bank seemingly inured to the cold wind.

We spy a kestrel and I am thrilled as it’s my second such sighting in days. I was worried about the local population of this little falcon so I’m encouraged to think they will continue to remain a permanent fixture of our landscape.

When summer arrives the paths will dry and the riverbanks will proliferate with marginal plants and flowers. I can foresee this from the riverside ghosts, the sentinels that remain to proclaim their patient but inevitable resurgence.

We head back to the car park with the wind at our backs and once more listen to the river’s roar as we traverse the lock. The wind drops suddenly as we
re-enter Mill Lane.

On the way home, we find ourselves in the warmth of the Flowing Spring at Playhatch and neither of us is complaining.