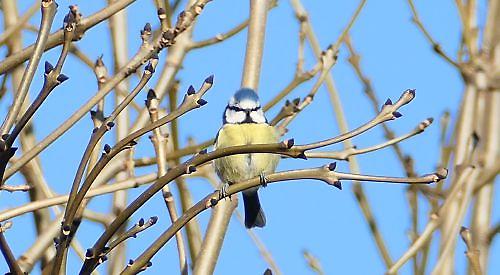 SPRING has sprung early. Primrose-coloured catkins are already floating about in the breeze on hazel bushes. Daisies are proclaiming their presence, much to the delight of some nectar-starved and dozy-looking bumblebees. Nature is on the move.

The buds on the trees are latent, just waiting to burst forth. Song thrushes, dunnocks and robins are already busy singing their hearts out to stake their territorial claims. Diminutive wrens scurry about.

I hope for all their sakes that we do not have a cold snap between now and April. You never can be sure living on our island.

I provide my birds with food throughout the year out of fondness and a sense of duty.

Rosemary and I take a brief walk around Balmore Walk in Caversham after a visit to my mother. It is extremely windy but great to be out.

My favourite ancient oak stands firm, its roots embedded in the clay. How deep do they travel, I wonder?

A distance away a mixed native hedge has recently been expertly laid by the Reading econet volunteers. It looks great. A few days later, we’re back at Henley’s Marsh Lock. Walking along the sturdy wooden walkway, the river is on the rise once again, crashing through the weir with tremendous power.

Splendid views are afforded here wherever you care to look in any season, weather permitting.

The towpath that extends from the end of Mill Lane into Henley is nearly completely submerged and impassable.

A few days later, it is Rosemary’s birthday. We arrange to meet some friends at the King William IV pub at Hailey. According to J Baker’s The Ipsden Country (1959), the name is derived from the old Celtic, meaning “upland place or settlement”.

After gaining the pub, a steepish unmade track leads to the neat and small settlement of Homer, which Baker informs means “high boundary” or “uphill farm”.

Before our rendezvous we collect my mother and pay a visit to Notcutt’s Garden Centre near both Nuneham Courtenay and the Harcourt Arboretum (another planned excursion).

They have some splendid trees on sale (difficult to resist). There is a resident friendly robin and a solitary male peacock that seems fixated on a large-scale preen. A handsome bird indeed.

We head back towards Hailey via the quizzically-named Golden Balls roundabout. The Chiltern escarpment lies ahead.

Before parting company after an immensely enjoyable time we step outside to take in the landscape.

The sky seems huge here and wherever you gaze there seems to be something of note. A shapely clump of trees, the undulating line of the hills, the sweep of the land or the huge flocks of rooks that scour the turf in pursuit of grubs.

Then we’re back in Henley with the intention of walking to Remenham along the Thames Path and then back alongside Remenham Wood and my nemesis, the tricky stile.

By the time we reach the end of New Street it’s plain that our planned walk is off. The Thames seems higher than ever, the path on the Berkshire bank under water.

All hell lets loose as Rosemary throws bread to the river birds. In a scene of Hitchcockian dimensions, the bread is fought for with passion and much screeching and hissing. Gulls fly about a few feet away above our heads like maniacs.

We make our getaway and head up Hart Street to the shops.

We stop off in St Mary’s churchyard. The trees are full of small birds. A blue tit looks particularly miffed about something and stares at us with some gravity.

It seems there is no pleasing the birds this day.